The Russian Foreign Minister calls it a "rumor" that the US is working to pave the way to the negotiating table. 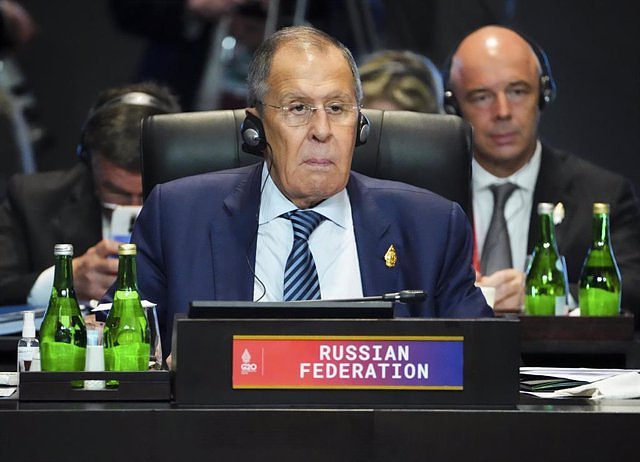 The Russian Foreign Minister, Sergei Lavrov, stressed on Tuesday that Moscow "does not refuse to negotiate" peace with Ukraine and said that "if anyone rejects this path, it is Ukraine", before calling the talks "rumours". information on the work of the United States to pave the way to the talks table.

"We have repeatedly confirmed through the mouth of the (Russian) president, Vladimir Putin, that we do not refuse to negotiate. If anyone rejects this path, it is Ukraine," Lavrov said during his speech on the sidelines of the G20 summit in Indonesia, in which he heads the delegation in the absence of the Russian president.

Thus, Lavrov has warned that "the longer Ukraine refuses to negotiate, the more difficult it will be to negotiate," according to the Russian news agency TASS. "Regarding the information that the United States is preparing negotiations: they are rumors that constantly appear and disappear in the same way. We no longer react to these things," he argued.

"We want to see clear evidence that the West is really interested in putting down (Ukrainian President Volodymyr) Zelensky and explaining to him that this cannot continue like this, that this is not in the interest of the Ukrainian people," the Russian foreign minister said. , as reported by the Interfax agency.

The Russian government on Monday described as "unacceptable" the demand for the withdrawal of troops from Ukraine to start peace talks to put an end to the war triggered on February 24 by the invasion order given by Putin.

In response, Ukrainian Foreign Ministry spokesman Oleg Nikolenko stated that "Russia is not in a position to dictate its conditions." "Ukraine's peace formula remains unchanged. Immediate end to the war, withdrawal of all Russian troops, restoration of Ukrainian territorial integrity, compensation for the damage caused and delivery of effective guarantees for the non-repetition of aggression," settled.

Ukraine has repeatedly called for the withdrawal of Russian troops from the occupied territories in view of the start of peace talks, calls that have intensified in the face of the military advances made by the Ukrainian Army in recent weeks, especially in the Kharkov and Kherson.