The prime minister charges critics with a sentence for a soldier after verbally challenging an activist. 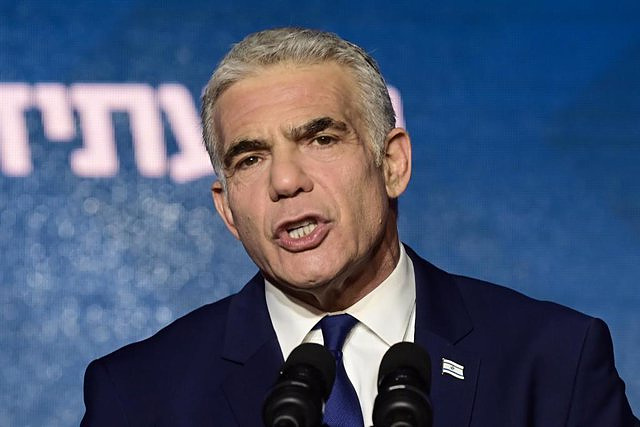 Israel's Prime Minister Yair Lapid has accused the incoming government of "inciting soldiers to turn against their commanders" after criticism of a conviction of a military man who verbally challenged an activist at the West Bank city of Hebron.

The soldier, whose identity has not been revealed, affirmed that the far-right parliamentarian Itamar Ben Gvir, who will be appointed minister of National Security in the new Israeli government, "is going to solve things in this place." "You've lost, the fun's over," he said.

After being asked by the activist if he was doing something "illegal" by recording him, the soldier replied: "Everything you do is illegal. I am the law," before ordering him to walk away. In addition, he wore a patch on his military clothing that read 'One shot. A death. No regrets. I decide'.

The decision to sentence him to ten days in jail for his actions was immediately criticized by Ben Gvir, leader of the far-right Otzma Yehudi, who said the move "crosses a 'red line' and sends a damaging message to soldiers."

For this reason, Lapid has stated that "the new government has not yet been sworn in and its ministers are already inciting the soldiers against their commanders", in the midst of the talks led by the designated prime minister, Benjamin Netanyahu, to assemble the new Executive.

"The savage incitement by the (future) ministers and parliamentarians against the head of the Army, the commanding officer (central) and the battalion commander, Aviran Alfasi, is dangerous, destructive and falls on the head of the new Government," has pointed to his account on the social network Twitter.

Alfasi was responsible for making the decision to punish the soldier for "failures in disciplinary procedures", which has unleashed a wave of criticism that has also been joined by members of the Likud. Lapid has stressed that the military "cannot receive permission from ministers and parliamentarians to violate the orders of their commanders."

"Their lives and ours depend on having a strong Army with a clear chain of command and battle discipline. This incitement, disguised as 'backup', is dangerous, irresponsible and damages the strength of the Israel Defense Forces (IDF). ", has settled the acting prime minister.

The criticism has been joined by the head of the Army, Aviv Kohavi, who has stressed that "attacking Alfasi is unacceptable." "Any interference in the decisions of our commanders is unacceptable," he said, before adding that "defaming commanders for political purposes is a delicate matter that, as a society, we must not fall into."

"We will not allow any politician, neither from the right nor from the left, to interfere in command decisions or use the Army to promote a political agenda, he said. "Political interference in the Army directly damages the Army's ability to carry out carry out its tasks, as well as its legitimacy", has settled.

Ben Gvir has responded to Kohavi to convey that he supports him but that "just as he asks that a soldier not express himself politically, he himself should avoid making political statements." "When a defense minister is down and no one sets policy, there is a power vacuum. I have no intention of interfering with punishment, but policy must change," he has argued.

For his part, Netanyahu has asked to leave the Army out of political disputes. "The IDF is the Army of the people. I ask everyone, left and right, to leave it out of any political dispute," he has reviewed through his account on the social network Twitter.

According to information collected by the newspaper 'The Times of Israel', the convicted soldier has apologized and requested that the sentence be reduced or withdrawn. "He said a few words with no intention of humiliating the IDF or committing a crime and now I see that he must go to prison," he said.

"I was under a lot of pressure during the incident and I ask that what happens there be taken into account. I apologize. I understand my mistake," he stressed, after which the Israeli Army has indicated that it will consider the request to reduce the punishment.

During the day on Monday, an Israeli Army commander warned the military that there would be repercussions for this type of action, while three soldiers were arrested on Monday for allegedly being behind the launch of an explosive against a Palestinian home in the West Bank.

"Troops that do not behave in a moral way, as expected of them, will not carry out operational activities until the end of the investigation into the incident," Nadav Lotan, who heads Division 162, said after the latest incidents.