South Korea regrets Kim Yo Jong's words: "We condemn the attempt to incite intergovernmental struggle against our people". 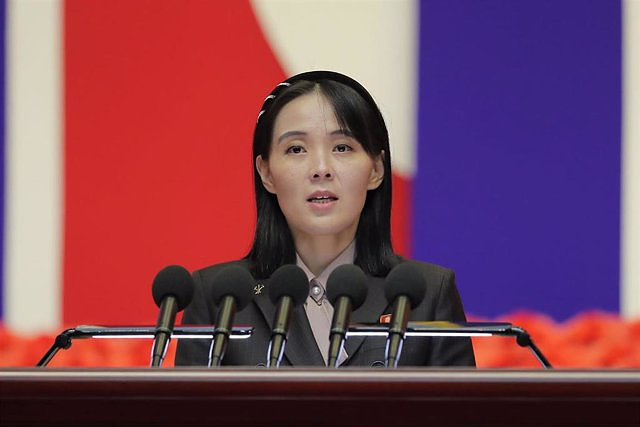 South Korea regrets Kim Yo Jong's words: "We condemn the attempt to incite intergovernmental struggle against our people"

Kim Yo Jong, sister of North Korean leader Kim Jong Un, criticized the United States and South Korea on Thursday for announcing new sanctions against Pyongyang in the context of the escalation of tensions due to the increase in ballistic missile launches by Korea from North.

Kim has claimed that Seoul is a "loyal dog" and a "puppet" of the United States, according to a statement published by the North Korean state news agency KCNA.

"On November 22, the South Korean Foreign Ministry described the exercise of our right to self-defense as a 'provocation', stating that they were considering additional 'independent sanctions' because our 'provocation' continues," he explained, referring to the launch. of a long-range ballistic missile that landed in the Sea of ​​Japan, known as the East Sea in the region.

"As soon as the US called for 'independent sanctions' against the (Democratic People's Republic of Korea, official name of the country) DPRK, the South Korean puppets disgustingly imitated it," he said, adding that "it becomes clearer that they are the 'faithful dog' ' and US puppet."

Kim has continued to criticize his neighbor to the south, which he has blamed for "creating dangerous situations", while he has assured that the sanctions are "useless" because they "could not escape the current dangerous situation" through them.

Likewise, he has pointed to the Government of Yoon Suk Yeol, indicating that the country was not his "target" with the previous administration, led by Moon Jae In.

Earlier this week, the South Korean Foreign Ministry said it was considering imposing sanctions in response to the launch of an intercontinental ballistic missile capable of hitting the entire US mainland.

These statements by Kim came two days after he denounced the "hypocrisy" of the United Nations Security Council, considering that the organization "looks the other way in the face of the danger posed by the US and South Korean military exercises." South in the zone".

Thus, he spoke of the "double standards" of the members of the Security Council on this matter after it met to address precisely the launch on Friday of a 'Hwasong-17' intercontinental ballistic missile by North Korea.

The numerous ballistic tests carried out by the North Korean authorities have increased tension in the region and have set off all the alarms about possible provocations and nuclear tests.

The South Korean Ministry of Unification has expressed regret over the "speech" by Kim Yong Un's sister.

"I am very disappointed that the vice minister criticized our head of state with vulgar words and did not show elementary courtesy," said a spokesman for the ministerial portfolio, as reported by the South Korean news agency Yonhap.

"Although the current tense situation on the Korean peninsula has been caused by North Korea's successive missile provocations, we are very sorry for the attitude of the bandits who are trying to attack us by blaming us," the spokesman added.

In this sense, he added that his Cabinet strongly condemns the impure attempt to incite anti-government struggle against our people and shake the system. No one will sympathize with these attempts, rather, the perception of the North Korean authorities will only worsen.

‹ ›
Keywords:
Estados UnidosCorea Del NorteCorea Del Sur
Your comment has been forwarded to the administrator for approval.×
Warning! Will constitute a criminal offense, illegal, threatening, offensive, insulting and swearing, derogatory, defamatory, vulgar, pornographic, indecent, personality rights, damaging or similar nature in the nature of all kinds of financial content, legal, criminal and administrative responsibility for the content of the sender member / members are belong.
Related News