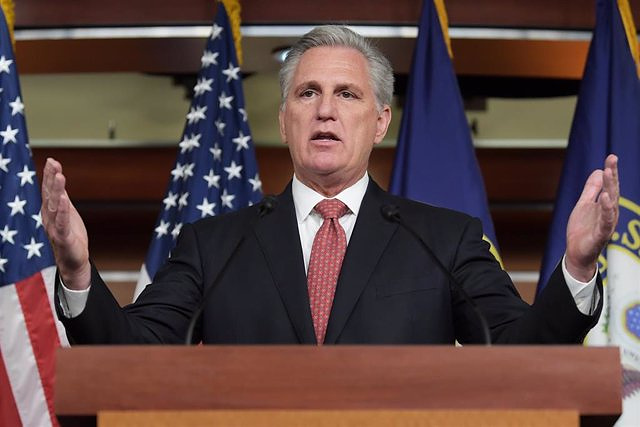 The leader of the Republican minority in the House of Representatives, Kevin McCarthy, hopes this Tuesday that he will be chosen as a new candidate to preside over the option of Andy Biggs, from the most extreme right-wing faction of the party, as the results of the elections of mid-term seem to confirm that the Democrats will lose power in this body.

Although the Republicans are expected to regain control of the House despite the fact that the results of the 'midterm' were not as expected, the real test for McCarthy will be to obtain the majority vote to preside over it in January, which means that he could yield to the claims of disgruntled Republicans.

He will have in front of his aspirations at least the representative of Arizona Andy Biggs of Arizona, former president of the most conservative bloc of Republicans within the House of Representatives, who has recognized that it will be "difficult" to beat someone who "raised a lot money" to convince his colleagues.

"This is not just about Kevin. I think it's about institutional direction and trajectory," Biggs said after McCarthy met with party colleagues from this same bloc -- the Freedom Caucus --, CNN reports.

"If we don't unite behind Kevin McCarthy, we are opening the door for Democrats to recruit some of our Republicans," said Georgia Rep. Marjorie Taylor Greene, one of the party's hard-line, conservative wing representatives. Close to Donald Trump.

McCarthy would be joined by Steve Scalise as the new leader of the Republican majority in the House, so position number 3, the party's discipline officer, would remain vacant, which could go to Minnesota representative Tom Emmer, president of the National Republican Congressional Committee.

After it is known whether McCarthy will be chosen by the Republicans to preside over the House, former President Trump is expected to announce his candidacy for the 2024 presidential race, amid criticism among Republicans who blame him for the poor results of these legislative