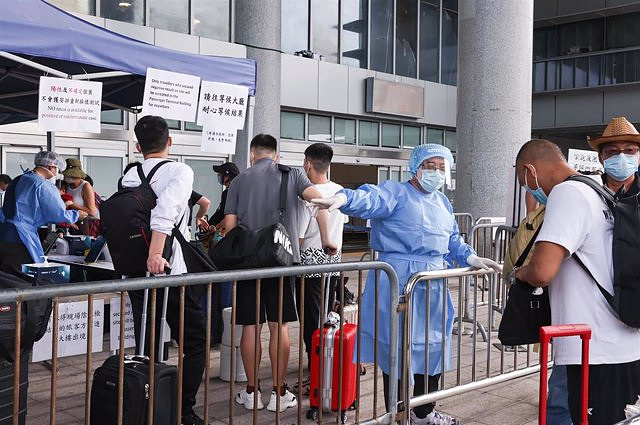 Hundreds of protesters protest in China against the 'COVID Zero' policy implemented by Xi Jinping in the country and the Communist Party after ten people died in a fire in a confined area, where some say emergency personnel could not access in time due to sanitary restrictions.

Although the Chinese authorities have been quick to deny it, protests have been registered throughout Saturday and early Sunday. In Shanghai, hundreds of university students have lit candles to mourn the dead and held up blank sheets of paper, a common symbol in protests against censorship.

Several videos broadcast on social networks show how some inhabitants are defying the strict policy against the coronavirus, movements that some witnesses interviewed by CNN describe as "unprecedented."

The US chain reports that in the images you can hear groups of students chanting slogans such as "Resign, Xi Jinping! Withdraw, Communist Party!" "I don't want the Covid test, I want freedom!" and "I don't want a dictatorship, I want democracy!" they added.

In other videos, groups of people sing the Chinese national anthem and The Internationale, from the socialist movement, while carrying banners protesting Beijing's strict measures.

In the capital there have also been protests in which, according to a witness transferred to CNN, security agents have tried to cover the banners by using jackets and covering the slogans with black paint.

Also in the eastern city of Nanjing, dozens of students from the Communication University have gathered to commemorate the deceased holding blank sheets of paper. In the videos, translates the North American chain, an official threatens: "They will pay for what they have done today."

In parallel, the number of coronavirus infections registers record figures in the country with more than 40,000 infected people.

‹ ›
Keywords:
ChinaIncendio
Your comment has been forwarded to the administrator for approval.×
Warning! Will constitute a criminal offense, illegal, threatening, offensive, insulting and swearing, derogatory, defamatory, vulgar, pornographic, indecent, personality rights, damaging or similar nature in the nature of all kinds of financial content, legal, criminal and administrative responsibility for the content of the sender member / members are belong.
Related News