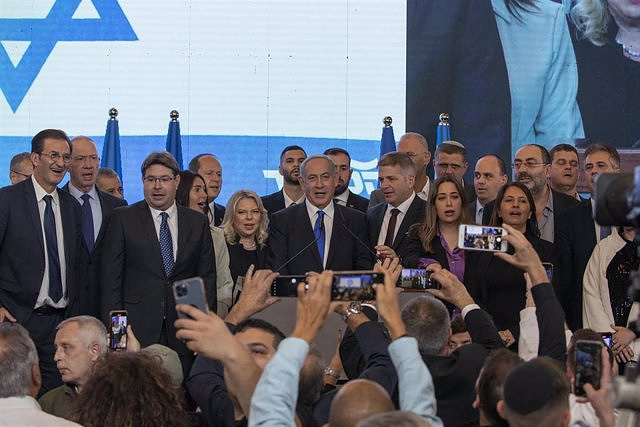 The President of Israel, Isaac Herzog, has granted this Sunday to former Prime Minister Benjamin Netanyahu the command to form a Government after the victory of the coalition led by the former president in the legislative elections at the beginning of the month, although he has recognized that it has not been a "easy decision" for the court cases weighing on Netanyahu.

"I do not forget that there are ongoing legal proceedings against Deputy Netanyahu in the Jerusalem District Court. I do not want to trivialize this situation. He is being tried. It has not been an easy decision," Herzog acknowledged at a press conference in relation to to the accusations of fraud, breach of trust and bribery that weigh on the former prime minister.

Herzog has clung to a Supreme Court decision that only prohibits the delivery of these powers to those who have been convicted.

"The Supreme Court has clearly expressed itself on the matter of pending accusations against a member of the Knesset nominated to form a government," Herzog recalled of what happened in April last year when his predecessor, Reuven Rivlin, assigned the same task to Netanyahu. , then already under investigation.

In his first remarks, Netanyahu has declared his intention to become "a prime minister for all". "It reflects what I believe and what guides my actions," he added, in comments collected by the 'Times of Israel'.

This Sunday, Netanyahu, Israel's longest-serving prime minister, receives for the eighth time the legally required mandate from an Israeli president to attempt to form a government, for which he will have 28 days plus an additional 14 at the discretion of the president if he doesn't get it at first.

The consultation process has been marked by some statements by Herzog captured by an open microphone in which he stated that "everyone is anxious" about the possibility that the leader of the far-right Otzma Yehudit, Itamar Ben Gvir, will acquire a portfolio in the Executive.

The Israeli president on Thursday conveyed these concerns to Ben Gvir himself, telling him that he has "a certain image that worries in many places about the treatment of Arabs in the state and in the region." "World leaders ask questions," he stressed.

"I am asked in the Muslim world about the Temple Mount. This is a sensitive issue," Herzog said, referring to the Esplanade of the Mosques by the name by which Jews know the place, as reported by the newspaper. The Times of Israel'.

In response, Ben Gvir said he "doesn't treat the Arabs like a monolith," although he stressed that "there must be order." "We are not saying that the Temple Mount is not sacred to others, but we have to remember that it is our heart and our history. We are against racism and you cannot tell a Jew that he cannot go because he is a Jew. I am for the equal rights," he settled.

Ben Gvir has been accused in the past of inciting violence and stirring up tensions with the Palestinians. The parliamentarian has made numerous visits to the Esplanade of the Mosques and supports that Jews can pray in the place, something prohibited at the moment.

In the event of being appointed Minister of Public Security, Ben Gvir would be in charge of security operations in the Esplanade of the Mosques, located in the Old City of Jerusalem and epicenter of the tensions of recent months between Israelis and Palestinians, who are protesting against violations of the 'status quo' on the ground.

Also in the last few hours, doubts have arisen about the role that the leader of Religious Zionism, Bezazel Smotrich, who would have requested the Defense portfolio, will play, according to Kan News sources. However, other sources point to the media that Netanyahu would be more inclined to award the Ministry to someone from his Likud party and propose the Treasury office to Smotrich instead.

Shas leader Aryeh Deri, who has reportedly been considered for the Finance Ministry, is now likely to get the Home Ministry, which he headed in the past, according to Channel 12 and 'Yedioth Aharonoth' sources. The Shas party would also receive the Ministry of Religious Affairs.