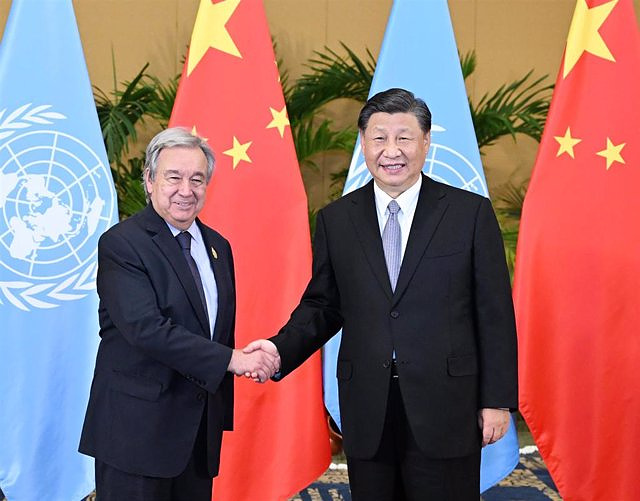 The Secretary General of the United Nations, António Guterres, stressed this Wednesday before the President of China, Xi Jinping, the importance of multilateralism, international cooperation and solidarity in the context of current global challenges.

Guterres, in a bilateral meeting with Xi after the G20 Summit in Bali, Indonesia, has expressed his "concern regarding the perfect storm facing many developing countries and the significant increase in poverty, hunger and dramatic inequalities in the world".

In this sense, he has informed the Chinese president about the Black Sea Grain Initiative, as well as the latest developments, among which the removal of obstacles to the unimpeded access of Russian food and fertilizers to world markets, reports a UN statement.

Likewise, the head of the United Nations, who took advantage of the meeting to congratulate the leader on his re-election as Secretary General of the Chinese Communist Party (PCCh), was interested in the contributions of the Asian giant to the Climate Solidarity Pact.

However, he has reiterated the international organization's commitment to cooperation with Beijing in terms of peace and security, sustainable development, climate change and Human Rights.

‹ ›
Keywords:
ChinaOnu
Your comment has been forwarded to the administrator for approval.×
Warning! Will constitute a criminal offense, illegal, threatening, offensive, insulting and swearing, derogatory, defamatory, vulgar, pornographic, indecent, personality rights, damaging or similar nature in the nature of all kinds of financial content, legal, criminal and administrative responsibility for the content of the sender member / members are belong.
Related News