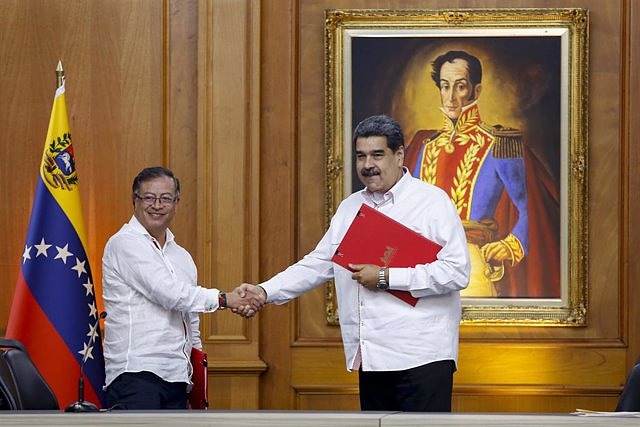 The Venezuelan opposition leader Juan Guaidó has assured that the movements to relaunch the negotiations between the Government of Venezuela and the opposition seek to solve the conflict with a free and fair election "as they have demanded for years", while former Colombian President Iván Duque lists five conditions to avoid "another trap" by Maduro.

Both politicians have made reference to the latest movements by France, Colombia and Argentina to promote dialogue between Maduro's team and the United Platform in Mexico.

Guaidó has commented that it is an "additional tool" by which countries that are currently in democracy, beyond their ideological tendency, focus on holding free and fair elections as a solution to the conflict in Venezuela, in a video posted on his Twitter profile.

In addition, he has estimated that the relationship between the three foreign leaders must "pay" towards the achievement of a comprehensive agreement. And he has argued that the extension of the sanctions imposed on Venezuela by the EU is due to the fact that its member countries are aware that it is a dictatorship.

Instead, Petro's proposal is that there be an economic release, that an amnesty be launched by which all prisoners detained for political reasons are released and an electoral coexistence pact is drawn up that shields guarantees for all forces. , so that citizens have the opportunity to decide.

On the contrary, the former president of Colombia Iván Duque has criticized that if the immediate freedom of political prisoners is not fulfilled, with immediate free presidential elections, guarantees of strict international observation, if Maduro does not participate in the electoral appointment and there is no Venezuela's reconstruction plan, the gesture would end up being "another trap by the Narco Dictator Maduro with the complicity and ingenuity of others," as he pointed out on Twitter.

‹ ›
Keywords:
VenezuelaColombiaGuaidó
Your comment has been forwarded to the administrator for approval.×
Warning! Will constitute a criminal offense, illegal, threatening, offensive, insulting and swearing, derogatory, defamatory, vulgar, pornographic, indecent, personality rights, damaging or similar nature in the nature of all kinds of financial content, legal, criminal and administrative responsibility for the content of the sender member / members are belong.
Related News