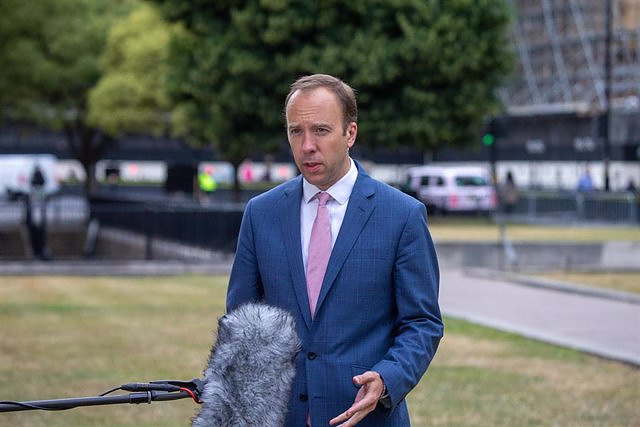 Former UK Health Minister Matt Hancock has been the victim of an attack on the London subway by a man in his 60s who has already been arrested and remains in police custody.

The British Transport Police (BTP, for its acronym in English) has reported that the first notice it received about the incident alerted of a man "assaulted and harassed" at Westminster station early on Tuesday morning.

After this, the authorities have arrested a 61-year-old man as the main suspect in the attack, although it is true that the investigation is still underway, according to the British channel Sky News.

According to a spokesperson for the former minister, the incident was "very aggressive and unpleasant", and he has ventured that the attacker was a "dangerous conspiracy theorist". Likewise, he has thanked the police officers and the BTP for their work.

"Fortunately, this type of behavior is a rare occurrence, but it is instances like this that re-emphasize the importance of stopping baseless misinformation that causes so much damage."

Hancock served as health minister from 2019 to 2021, when he resigned after it emerged that he had breached restrictions during the pandemic to date another woman with whom he was allegedly having an extramarital affair.

At the end of 2022, he again aroused controversy by participating in the program 'I'm A Celebrity... Get Me Out of Here!', a survival reality show where he participated along with other celebrities and for which the British Conservative Party decided to suspend him as deputy.

‹ ›
Keywords:
Reino UnidoLondres
Your comment has been forwarded to the administrator for approval.×
Warning! Will constitute a criminal offense, illegal, threatening, offensive, insulting and swearing, derogatory, defamatory, vulgar, pornographic, indecent, personality rights, damaging or similar nature in the nature of all kinds of financial content, legal, criminal and administrative responsibility for the content of the sender member / members are belong.
Related News