The president aspires to extend his more than 40 years in power against candidates without real possibilities. 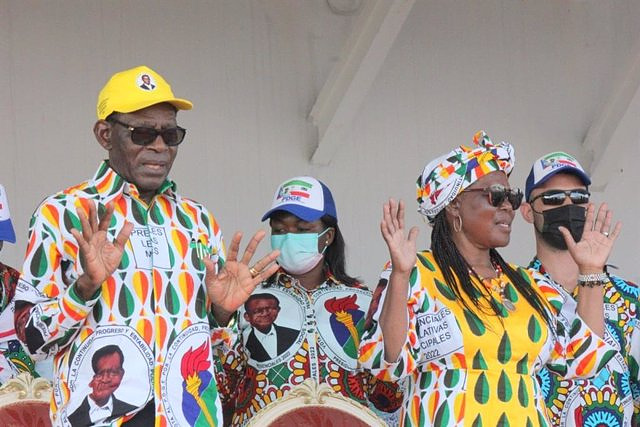 The main opposition party, the only one with a seat in Parliament, was outlawed in 2018

The population of Equatorial Guinea goes to the polls this Sunday for presidential, parliamentary and municipal elections in which the current president, Teodoro Obiang Nguema, aspires to revalidate the post he has held since the 1979 coup d'état, without weighty candidates who aspire to remove him from power.

Obiang, 80 years old and the president who has been in power for the longest time in the world, has led the country since the coup against his uncle, Francisco Macías Nguema, who in 1968 became the first president of Equatorial Guinea since the country's independence. of Spain in 1968.

The Equatoguinean president announced that the presidential elections would be brought forward five months to make them coincide with the legislative and municipal elections, amid opposition complaints about repression and exclusion from the Equatoguinean political system.

Despite the fact that there are 18 legalized parties in the country, in practice there are no opponents with a real chance of removing Obiang from power, amid speculation about the possibility of a 'dynastic' succession that would lead to the rise of his son, Teodoro Nguema Obiang Mangue, known as 'Teodorín', who has held the Vice Presidency since 2016.

The PDGE also aspires to maintain its tight control of both houses of Parliament. It currently has 99 of the 100 seats in the National Assembly and 55 elected seats in the Senate -- which has 70 seats, although 15 are directly appointed by the president.

The elections are also the first to be held since the authorities' decision to outlaw in 2018 the activities of the main opposition party, Ciudadanos por la Innovación (CI), which has operated since then in exile due to the arrest of its main officials.

The electoral campaign has been marred by Malabo's accusations against Spain, France and the United States for alleged "electoral interference" by participating in a CPDS act. "We do not understand the presence of diplomatic agents from these countries at meetings of political parties," said Equatorial Guinea's Foreign Minister, Simeón Oyono Esono Angüé.

The accusations were rejected by the CPDS, which indicated in a statement that it "informed in writing" the Ministry of the Interior about the act, intended to present its electoral program, and informed the Government that among the guests were representatives of the diplomatic corps, without Malabo will present "any objection".

"The CPDS deeply regrets the virulent attitude of the PDGE government against the diplomatic missions of Spain, France and the United States accredited in our country, which makes clear and recalls its eternal frivolity in diplomatic relations with these Western countries," he stressed, while that the Government of Pedro Sánchez rejected the accusations of the authorities of the African country.

Likewise, the authorities have intensified the repression against opponents and activists ahead of the elections, in the framework of activities that Malabo justifies as a response to an attempted coup that included plans to attack embassies and ministers' homes.

The operation resulted in the death of four activists and a police officer, according to the authorities, and was followed by a wave of arrests that has been denounced by the organization Plataforma SOMOS, which warned in a statement that "subjecting the population to so much pressure and tension, it is not good for coexistence, much less, to find solutions to the 'status quo'".

The SOMOS Platform also accused Obiang of a "pre-war atmosphere" for the arrests, which it described as "State terrorism." "His sole purpose is to increase uncertainty and fear in the public," he said, as reported by the Equatoguinean portal Radio Macuto.

For its part, CI has denounced on numerous occasions that its leader, Nsé Obiang, is imprisoned "in subhuman conditions", which has caused his health to worsen. In a statement published on October 11, the party said that the opponent "is in a cell watched by cameras 24 hours a day and practically naked," without Malabo responding to the accusations.

The elections will also take place in the midst of complaints from the opposition and non-governmental organizations about the absence of a context that allows the development of democracy and the activities of civil society, in the midst of firm repression by the authorities.

Thus, Freedom House highlights on its website that Parliament "does not have a relevant role" in decision-making, which depends entirely on the Executive. The country also lacks an electoral commission and, in fact, the body was headed in 2017 by the Minister of the Interior.

The organization also highlights that "the regime routinely uses the security forces to attack and intimidate opposition supporters", while "political loyalty to the government party is a condition for obtaining and maintaining a job in the public sector ".

Added to this, according to Freedom House, is the absence of "independent mechanisms against corruption", in the midst of complaints against Obiang and his family for cases of corruption that damage the country's ability to undertake projects that improve the lives of the population. .

On the other hand, there are limitations to press freedom, with only one private television, which is also controlled by 'Teodorín', while the independent media face "intense financial and political pressures" that prevent them from publishing regularly.

The African Union (AU) recently announced the deployment of an electoral observation mission headed by Jose Mario Vaz, former president of Guinea Bissau, and stressed that it will publish a report on November 22 with its assessment of the process.

In recent days there have been international calls in favor of clean voting, among which stands out the United States, which called on Malabo to guarantee a "free and fair" vote on the occasion of the start of the electoral campaign.

"Equatorial Guinea can cultivate a more inclusive, peaceful, and democratic society by guaranteeing the expression of diverse political perspectives, a free and fair voting process, and the protection of the Human Rights of all individuals," said the State Department spokesperson, Ned Price.

Few surprises are expected at the polls, however, and Obiang is counting on extending his term in Equatorial Guinea, which has yet to experience a political transfer of power through elections since its independence from Spain in 1968.

‹ ›
Keywords:
Guinea Ecuatorial
Your comment has been forwarded to the administrator for approval.×
Warning! Will constitute a criminal offense, illegal, threatening, offensive, insulting and swearing, derogatory, defamatory, vulgar, pornographic, indecent, personality rights, damaging or similar nature in the nature of all kinds of financial content, legal, criminal and administrative responsibility for the content of the sender member / members are belong.
Related News