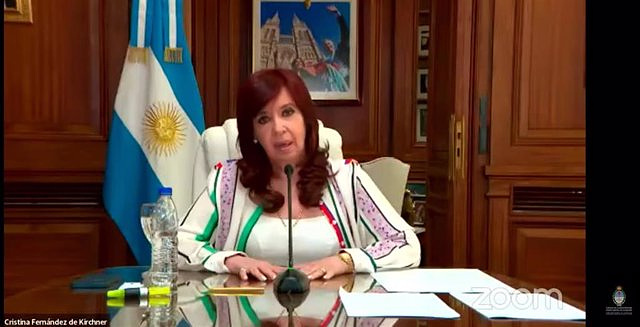 The vice president of Argentina, Cristina Fernández, has affirmed that the court that is trying her for an alleged corruption plot in the so-called 'Road case' is actually "a firing squad", in her last turn to speak before it is known the verdict on December 6.

Fernández, who has appeared again by videoconference, has assured that the task of this process is to "stigmatize" her Government and try to overshadow the "achievements" obtained, presumably with "lies" that she herself has tried to expose both in the court and in social networks.

On his Twitter account, he has published "the twenty lies of the Road Cause", with which he intends to show that the accusations are unfounded. Thus, he disassociates himself from orders, visits and procedures that, in the opinion of the Prosecutor's Office, do They prove the corruption.

"The sentence is written, but I never thought it was going to be so badly written," he lamented in his appearance this Tuesday, which lasted about 20 minutes and in which he spoke again of the "judicial party" to warn of the alleged political persecution against her, according to local media.

Fernández sits on the bench as an alleged participant in an illegal plot to defraud the State through the concession of public works in Santa Cruz, along with more than a dozen defendants. The Public Ministry estimates at 5,321 million pesos (about 31 million euros at current exchange rates) the amount defrauded by a network that also splashes the late husband of the vice president, Néstor Kirchner, and former officials such as former minister Julio de Vido.

The Public Ministry has requested twelve years in prison against Fernández, for which it has also claimed political disqualification for life, although the final result will vary depending not only on whether he is guilty or innocent but also on to what extent the judge considers that the former president led a criminal association.