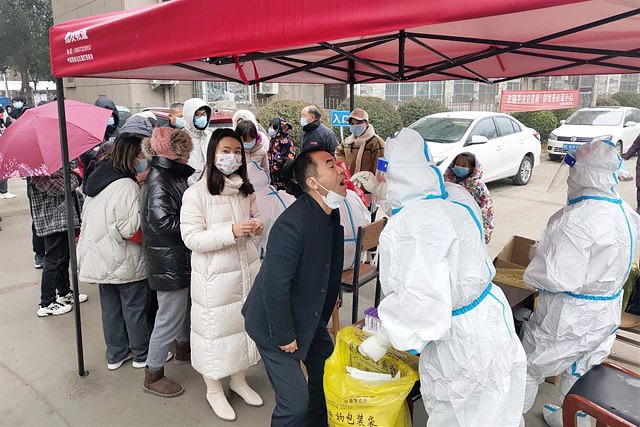 The Chinese authorities have partially lifted the restrictions against the coronavirus imposed in various areas of the cities of Canton and Zhengzhou despite the high number of infections and after strong protests in various parts of the country precisely against the 'COVID zero' policy. of the government.

Some districts of the city of Canton, which is located in the south of the country, may benefit from the lifting of some of the most restrictive measures against COVID-19, as reported by local authorities, who have spoken of an imminent lifting of lockdowns.

"The lockdowns, if established, must be lifted quickly and must come to an end when necessary to minimize the inconvenience caused to the population," Zhang Yi, deputy director of the Guangdong health commission, told the newspaper. newspaper 'South China Morning Post'.

The authorities have thus begun to give in to the growing protests, which have spread as a result of the fire registered last week in the Xinjiang region, in the northwest of the country, where ten people died due to the late intervention of the firefighters precisely because of the sanitary control measures.

As the protests against this government policy progress, the city, which has 19 million inhabitants, will only test those people who have been in close contact with an infected person and will stop carrying out these tests en masse, as until now.

In Baiyun, Liwan and Panyu counties, all areas that were under "temporary control measures" so far have been declared "low risk," Zhang explained. Baiyun residents have been under lockdown measures since November 21.

However, the authorities have stressed that the lifting of restrictions does not imply leaving aside preventive measures against the coronavirus and have urged residents to continue wearing a mask and avoid crowds and gatherings.

The decision to partially lift some of these measures came after a meeting of the working group on COVID-19 at the provincial level. The Governor of Guangzhou, Wang Weizhong, has stressed the importance of lifting the confinements "At the right time" and has come to support isolation measures at the local level (house to house) to minimize the impact of the outbreak instead of establishing widespread lockdowns.

In the city of Zhengzhou, where the US technology giant Apple's phone assembly plant is located, the authorities are also considering withdrawing part of the established measures, especially those related to confinement.

Local authorities previously announced that they would lift these measures in their main urban areas as cases increased, but they issued a list of homes with the highest risk of contagion that would be declared high risk by the Government.

This latest decision has been taken after the Chinese health authorities issued an order asking local authorities to avoid major restrictions when it comes to containing the virus after strong protests.

As of this Wednesday, the city will withdraw its well-known "mobility controls", the 'de facto' confinement that governs the city, to replace it with "normal measures against COVID-19", according to a statement from the authorities. Thus, companies will be able to resume their operations in an ordinary way and the population residing in the highest risk areas will not have to undergo tests as long as they do not leave their homes.

Beijing, for its part, has asked local authorities to adhere to a new 'route time' to control the outbreak, a document in which it warns of the danger of carrying out mass tests and extending the confinements.

In early November, Apple found itself in the position of warning its customers that waiting times to receive new iPhone models would increase as a result of the impact of the restrictions imposed to contain COVID-19 in the Asian giant.

Since then, Zhengzhou has tried to tighten these restrictions as tensions with the company, which is located in the high-risk area of ​​the city, have increased. The plant itself has registered protests after nearly a month of tough restrictions, which have largely hampered production.

China has registered more than 37,600 infections in the last day, with the province of Canton as one of the most affected in the country. However, citizens continue to take to the streets to protest the strict controls and demand greater freedom.