Brussels urges the 27 to unblock immigration reform: "It's like having a parachute and choosing to jump without it" 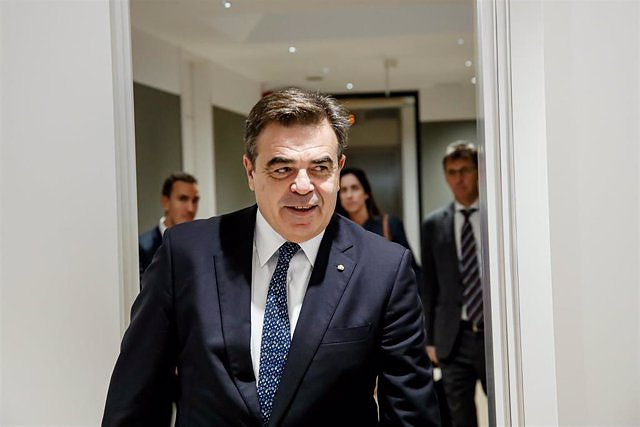 The Vice President of the European Commission responsible for Migration, Margaritis Schinas, urged European governments on Wednesday to unblock the reform of the EU Migration and Asylum Pact that has been negotiated for two years in order to cope with the increase in arrivals irregular routes such as the central Mediterranean or the Balkans, avoid deaths on the high seas and reduce tension between the partners themselves.

"It's ironic, we have everything we need at our fingertips but out of our reach. It's like having a parachute and choosing to jump out of the plane without it," Schinas warned in a debate on the immigration situation in plenary session of Parliament European Union that is held in Strasbourg (France), just two days before the EU Interior Ministers meet in an extraordinary way in Brussels.

In this way, the Community Vice President recalled that two years have passed since he presented, together with the Commissioner for the Interior, Ylva Johansson, a proposal to reform the EU's migration and asylum policy that seeks to establish a balance between the solidarity and responsibility of the EU countries.

The pact proposes binding measures, including a mechanism for the distribution among partners of the reception of refugees that will allow governments that do not want to assume their quota to contribute financially, as well as a reinforcement of the control of the external border of the EU and a boost to cooperation with the countries of origin and transit of irregular routes to stop departures and expedite deportations.

In this context, Schinas has warned the capitals that the European Union "does not need to reinvent anything" because it has the necessary instruments to respond with European solutions to the difficulties of the Member States in managing migratory pressure.

While the agreement for the fundamental reform is sought, Schinas said, the countries must also make "full use" of the instruments that they already have on the table, for example the voluntary relocation mechanism that more than a dozen countries --among them they Spain-- endorsed last June.

This platform was designed with the commitment to transfer thousands of migrants who arrived first in front-line countries such as Italy or Malta to other countries in the bloc but, in practice, it has barely served to relocate a hundred people.

However, the European Commission sees in this instrument one of the key tools to deal with immediate crises such as the situation in the central Mediterranean, where NGO boats carry out rescue tasks rescuing migrants on the high seas but then face the refusal of countries like Italy to allow them to disembark despite being the closest safe port.

After the last clash between Rome and Paris, by refusing the government of the far-right Giorgia Meloni to allow the ship of the NGO SOS Mediterranée to arrive at the port with more than 200 rescued migrants and forcing them to redirect to the free French, the government of Emmanuel Macron broke with the commitment to welcome some 3,000 people within the framework of the voluntary European platform.

Meanwhile, Schinas and Johansson will bring to the extraordinary meeting of European ministers this Friday an action plan with some twenty measures, including reactivating the voluntary relocation platform that, in the eyes of Brussels, can serve as a "bridge" to the permanent mechanism that exists within the framework of the Migration and Asylum Pact.

Together with the voluntary distribution, the Brussels plan is based on two other pillars: improving coordination in the area of ​​rescue between Member States and with third parties such as NGOs or European agencies and relaunching cooperation with third countries and international organizations to strengthen the control of the borders at the points of departure of migrants and expedite returns.

At this point, the Community Executive draws attention to the fact that the majority of people arriving via the central Mediterranean route come from Egypt, Tunisia and Bangladesh although they arrive from Libya, for which reason the EU considers them economic migrants without the right to international protection.

For this reason, Brussels advocates giving more means to the authorities of Libya and Tunisia to stop departures and fight against mafias and seek agreements with the countries of origin to ensure quick and safe deportations of their nationals.

"History does not repeat itself often, we must learn from the lessons of the past", Schinas requested, recalling the migration crisis of 2015 and pointing to the urgency of agreeing on solutions at the ministerial meeting, without forgetting the "need" to count on " long-term binding decisions.

"Urgent measures and discussions are useful but not enough," Schinas insisted, before calling for "permanent solutions" and stressing that the EU has them "at its fingertips." "We can do it and we must do it", she has riveted.

‹ ›
Keywords:
Comisión EuropeaBruselasUE
Your comment has been forwarded to the administrator for approval.×
Warning! Will constitute a criminal offense, illegal, threatening, offensive, insulting and swearing, derogatory, defamatory, vulgar, pornographic, indecent, personality rights, damaging or similar nature in the nature of all kinds of financial content, legal, criminal and administrative responsibility for the content of the sender member / members are belong.
Related News