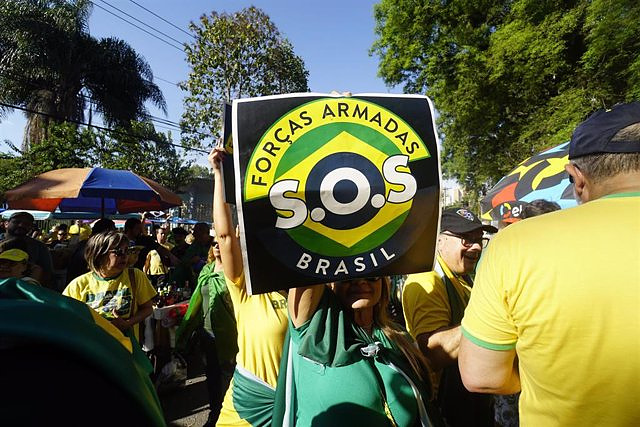 Jair Bolsonaro's political allies have recognized behind the scenes that the audit presented by the Liberal Party (PL) against the election results has no prospect of prospering and that its objective is to inflame protests that have been increasing in recent days. , registering acts of sabotage, aggressions and kidnappings.

On the eve of the PL's claim, the Brazilian Supreme Court warned its president, Valdemar Costa Neto, that he would have no chance of prospering, something he knew, but he justified that he would go ahead to avoid a rebellion within the nucleus of the PL. party closest to Bolsonaro.

Not even the most unconditional allies of the still president of Brazil trust that the Superior Electoral Tribunal will modify the result of the elections, however, at least, they hope that it will serve to establish the doubt that Bolsonaro was a victim of electoral fraud, such and how he was warning of this possibility during the electoral campaign.

Thus, according to a conversation among regulars at meetings with Bolsonaro at the Alvorada Palace to which the newspaper 'Folha de Sao Paulo' has had access, the PL's actions would at least serve to inflame the spirits in the streets.

In recent days, roadblocks and protests have intensified, especially in states such as Mato Grosso, Santa Catarina and Rondonia -where Bolsonaro obtained better electoral results- and there have been acts of sabotage that could be classified as possible terrorist offences.

Since the triumph of Luiz Inácio Lula da Silva became known, thousands of people have gathered at the gates of the Army barracks to ask between prayers and Nazi salutes for a coup d'état, or to stop traffic by burning vehicles, sabotage of infrastructures and attacks on police officers and drivers.

For the opposition, this new attempt to question the electoral result is nothing more than a plan that has been orchestrated over the last few years, intensified when Lula da Silva recovered his political rights. Since then they have been attacking electronic ballot boxes, now the target of this audit of the PL, the acronym under which Bolsonaro ran for election.

In these, the Brazilian press recalled an interview in May on the STB network with one of Bolsonaro's sons, Flávio, in which he anticipated that the distrust of some for electronic ballot boxes could generate "a revolt" and "danger of instability". ".