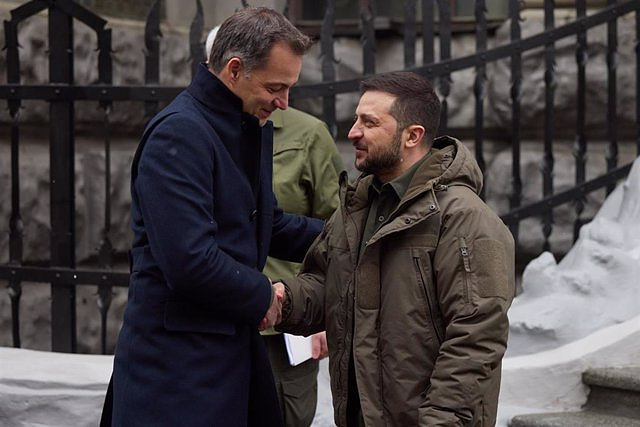 The President of Ukraine, Volodimir Zelenski, and the Belgian Prime Minister, Alexander de Croo, have signed this Saturday in kyiv a joint declaration of support for the Ukrainian initiative to become a member state of the European Union and for NATO as a measure of protection against the Russian invasion.

"I thank Belgium for the joint declaration signed today. This document certifies Belgium's support for our movement towards full membership of the European Union and NATO," Zelensky said during the Belgian Prime Minister's visit.

During the meeting, Zelenski and De Croo also discussed common issues of the conflict such as sanctions against Russia and military and humanitarian aid to Ukraine, especially before the arrival of winter.

The Ukrainian president recalled the estimates of the Belgian Federal Public Finance Service that place the country as the world leader by volume of frozen Russian assets (some 50,000 million euros). "It's something to appreciate," Zelenski assured at a press conference collected by Ukrinform.

Regarding the aid, De Croo declared as soon as he arrived that Belgium had begun to deliver new humanitarian and military aid for the "cold winter months that lie ahead."

"After the intense shelling of the last days, we support the people of Ukraine, now more than ever," he said on his Twitter account.

‹ ›
Keywords:
BélgicaUcraniaOTANUEVolodimir Zelenski
Your comment has been forwarded to the administrator for approval.×
Warning! Will constitute a criminal offense, illegal, threatening, offensive, insulting and swearing, derogatory, defamatory, vulgar, pornographic, indecent, personality rights, damaging or similar nature in the nature of all kinds of financial content, legal, criminal and administrative responsibility for the content of the sender member / members are belong.
Related News