The case has been reopened this year in El Salvador to prosecute the masterminds. 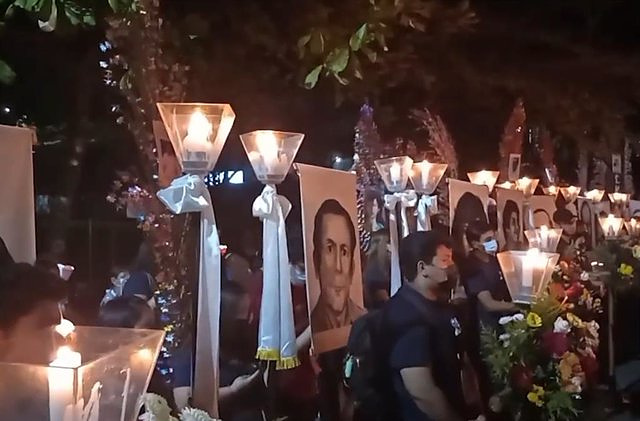 Hundreds of Salvadorans have demanded this Saturday to know the truth about the murder of six Jesuit priests - five of them Spanish - and two women perpetrated by the military in 1989.

"The truth is a right of the people to know who were the ones who committed these heinous crimes (of priests and women) and why they committed them so that they do not happen again," declared the rector of the Central American University (UCA). ) Jesuit, the priest Andreu Oliva, according to the Salvadoran newspaper 'El Mundo'.

The attendees have carried candles and flowers, as well as banners with the faces of the murdered priests. The march has traveled the streets of the UCA campus in the southwest of San Salvador and on the main street of the campus, students from the UCA made colorful carpets with images of the martyrs. On a large carpet is the motto of the 33rd anniversary of the crime: "Because the fight is fair, hope does not fade."

The Roque Dalton University Front (FURD) demanded in a statement "to bring to light all the atrocities committed by the army in the military dictatorships and what the neoliberal right continued until today."

"The murdered priests were good people who fought for the poor, that's why we remember them and ask for justice," said Domitila Cruz, 67, who came to the capital from the rural community of Bajo Lempa, some 85 km southeast of San Salvador.

The massacre took place in the early hours of November 16, 1989 on the UCA campus in San Salvador, the country's capital. Among the victims is the ideologue of Liberation Theology, the Spaniard Ignacio Ellacuría, then rector of the UCA.

Spaniards Ignacio Martín Baró (vice-rector), Segundo Montes, Amando López and Juan Ramón Moreno also died, in addition to Salvadorans Joaquín López, Elba Ramos and their daughter Celina. All of them were killed in the middle of a guerrilla offensive on San Salvador by soldiers from the Salvadoran Army's Atlacatl battalion.

In September 1991, a court tried nine soldiers who appeared as material authors without taking into account the intellectual authors, according to humanitarian organizations. Colonel Guillermo Alfredo Benavides was found guilty of all the murders and Lieutenant Yusshy René Mendoza was held responsible for the death of the minor Celina.

Both officers regained their freedom with a 1993 amnesty law, but Benavides was imprisoned again to complete his 30-year sentence, after the amnesty expired in 2016.

The case was reopened on January 5 of this year to try the alleged masterminds: ex-military Juan Orlando Zepeda, Francisco Elena Fuentes and Rafael Humberto Larios.

The case has also had its judicial journey in Spain and in September 2020 the National Court sentenced Colonel Inocente Orlando Montano Morales to 133 years in prison.

The civil war ended on January 16, 1992 with the signing of peace agreements between the government and the guerrillas of the Farabundo Martí National Liberation Front. The conflict left more than 75,000 dead, 7,000 missing and millionaire losses in the economy.