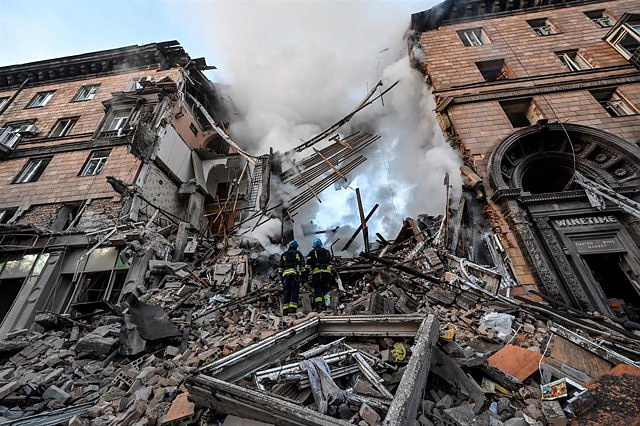 The Ukrainian city of Zaporizhia has received a new attack late on Friday in which two Russian missiles have hit an industrial infrastructure, although a total of five impacts have been recorded that have caused a fire in the area, according to the mayor. , Anatoly Kurtiev.

The local governor has reported that several people could have been trapped under the rubble, since there were employees working on the affected infrastructure.

"Putin's cynical terrorists once again viciously attacked Zaporizhia at night." "There may be people under the rubble right now. Ordinary, peaceful people who were just working at the time and posed absolutely no threat to the Kremlin's henchmen," he wrote on his Telegram channel.

As a result of this attack, half the population of one of the city's districts has been left without heating and several houses have been damaged, although they continue to measure the extent of these, as reported in a subsequent message.

"Russia is a terrorist country that will be responsible for all its actions. Its wickedness will not go unpunished in any case", he has sentenced at the end of the text.

Kurtiev has informed that the emergency services are working in the place after the impacts.

‹ ›
Keywords:
RusiaIncendioUcrania
Your comment has been forwarded to the administrator for approval.×
Warning! Will constitute a criminal offense, illegal, threatening, offensive, insulting and swearing, derogatory, defamatory, vulgar, pornographic, indecent, personality rights, damaging or similar nature in the nature of all kinds of financial content, legal, criminal and administrative responsibility for the content of the sender member / members are belong.
Related News