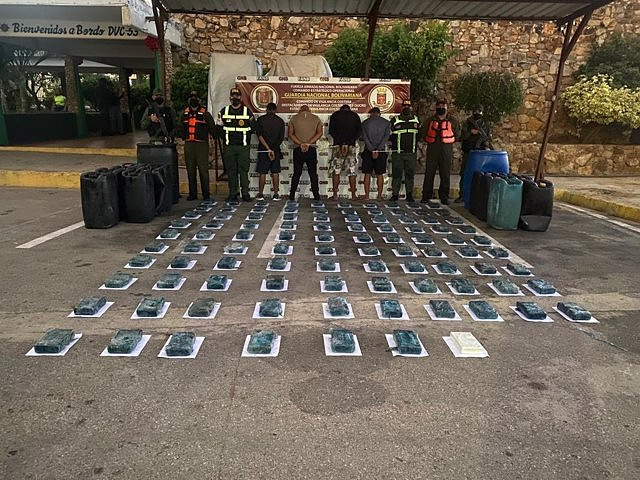 The Bolivarian National Armed Forces of Venezuela (FANB) has reported the seizure of 100 kilograms of cocaine found during a military operation in the state of Sucre, in the east of the country.

In addition, four individuals linked to the Tancol groups --Colombian Terrorists, Assassins, and Drug Traffickers according to the name used by the Caracas authorities-- have been arrested and a cayuco has been seized.

"FANB in ​​sovereign patrol missions along the eastern coast of Sucre, detains 4 subjects associated with TANCOL groups and seizes more than 100 kg of cocaine, transported in a rock with 2 200-horsepower engines," the strategic commander reported. FANB officer, Domingo Hernández Lárez, through his Twitter account.

This operation in the state of Sucre, located on the west of the Venezuelan Caribbean coast, far from the border with Colombia, is the country from which most of the cocaine circulating in the region comes.

‹ ›
Keywords:
VenezuelaCocaína
Your comment has been forwarded to the administrator for approval.×
Warning! Will constitute a criminal offense, illegal, threatening, offensive, insulting and swearing, derogatory, defamatory, vulgar, pornographic, indecent, personality rights, damaging or similar nature in the nature of all kinds of financial content, legal, criminal and administrative responsibility for the content of the sender member / members are belong.
Related News