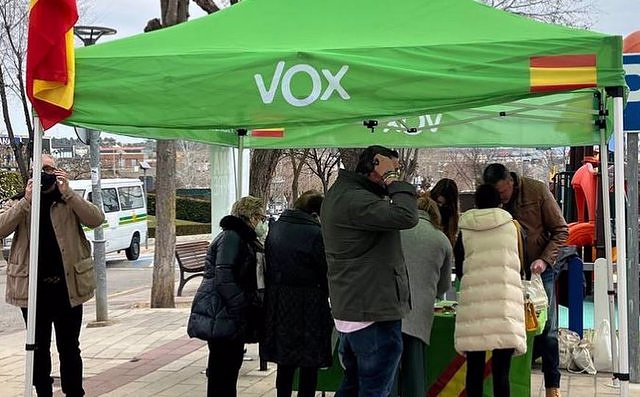 The Superior Court of Justice of Castilla y León (TSJCyL) has upheld an appeal filed by the Vox political party, has declared the nullity of the order to dismantle a tent and information table installed by the right-wing formation in front of the statue de Colón de Valladolid in 2020 and has sentenced the City Council to pay 2,500 euros to the recurring party.

The formation has highlighted, in a statement collected by Europa Press, that the sentence, which is not yet final because there is an appeal, gives them the reason to "freely develop" political activity in the streets of the city "against the prohibitionist theses that the mayor, Óscar Puente, and his government team are trying to impose".

The party led by Santiago Abascal installed a tent and information tables in the Plaza de Colón in Valladolid on October 11, 2020 on the occasion of the celebration of Hispanic Day and later intended to "protect" the statue of the discoverer located in said space and that just a year before had suffered an act of vandalism.

At that time, during the development of a concentration, agents of the Municipal Police gave an order to dismantle the tent and the tables, alleging that the purpose of providing information for which the party had requested authorization had already been fulfilled and that it was going to be carried out. another activity other than "protection of a statue", for which they considered it necessary to obtain another permit.

Vox filed a contentious-administrative appeal against said order, which was analyzed by the Court, which was finally dismissed in a resolution that in turn was appealed again by the right-wing formation, which requested its revocation.

Thus, the High Court has now ruled in favor of Vox's claims in a text in which it accepts that the concentration during the night around the table and the tent that was intended to be installed met "fully the requirements" to be "an expression of the right of assembly".

In addition, they agree with the Vox party in that what was argued in the initial sentence in reference to the fact that "the reasonable time" for the information activity carried out by the Vox party had been exceeded was not in accordance with the law. "Government authorization was requested for said concentration and it was granted, as we have seen, with two political objectives, the motion of censure presented by VOX and the surveillance of the statue of Columbus," added the court.

In addition, it considers that the interpretation that is made in the sentence that temporarily limits the political action of information supposes "an unjustified restriction of the right of assembly" and it is even understood that there has been a "serious and unjustified violation" of said right by of the Municipal Police, dependent on the Valladolid City Council.

For this reason, the TSJCyL understands that "moral damage" was caused to the Vox party and quantifies it at 2,500 euros.

The ruling revokes and annuls the judgment of the Contentious-Administrative Court 3, and instead upholds the lawsuit filed by Vox against the Order of the police officers to dismantle the tent and table located in the Plaza de Colon, in addition to annulling it due to its disagreement with the legal system.

In the same way, it condemns the City Council to pay the amount of 2,500 euros to the appellant party and the costs are imposed.

However, the resolution is subject to an appeal before the Contentious-Administrative Chamber of the Supreme Court or before the TSJCyL itself, within a period of thirty days following the notification of the sentence.

Vox Valladolid has demanded that the mayor, Óscar Puente, "assume his political responsibilities" for having tried to "absolutely illegally prevent Vox from exercising its constitutional right of assembly and political participation of citizens."

‹ ›
Keywords:
VOXAyuntamiento De Valladolid
Your comment has been forwarded to the administrator for approval.×
Warning! Will constitute a criminal offense, illegal, threatening, offensive, insulting and swearing, derogatory, defamatory, vulgar, pornographic, indecent, personality rights, damaging or similar nature in the nature of all kinds of financial content, legal, criminal and administrative responsibility for the content of the sender member / members are belong.
Related News