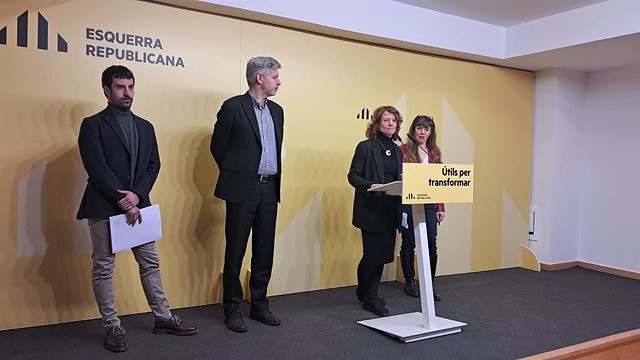 Those convicted of ERC for 1-O will appeal "any resolution that does not apply the most favorable law" in the review of the sentence of the Supreme Court (TS) after the penal reform that repealed sedition and modified embezzlement.

"If the interpretation made by the Supreme Court does not apply the most favorable law, which is what the law obliges it to do, this resolution will have to be appealed," said lawyer Andreu Van den Eynde this Wednesday in a press conference together with the lawyer Olga Arderiu, lawyer Raimon Tomàs and ERC's Vice-Secretary General for Derechos, Libertades y Lucha Antirepresiva, Marta Vilaret.

Van den Eynde has specified that this eventual appeal would be presented before the Supreme Court itself and that later the decision can also be appealed in the Constitutional Court (TC) and later in the European Court of Human Rights (ECHR).

On Tuesday, the leader of ERC, Oriol Junqueras, the former ministers Raül Romeva and Dolors Bassa, and the former president of Parliament Carme Forcadell asked the Supreme Court to acquit them in the process of reviewing the sentence, and this Wednesday the Prosecutor's Office has asked the court that maintains penalties of disqualification for those convicted of 1-O.

When asked about the possibility of the court applying the attenuated modality of embezzlement, Van den Eynde stated that this option "is not acceptable".

He has remarked that the 1-O sentence "does not speak or make mention anywhere of any profit motive" -which is now a requirement for serious embezzlement- and believes that the facts proven in the sentence do not allow them to be convicted of this crime.

Another argument of the defenses to withdraw the conviction for embezzlement is that this was applied as a medial crime, that is, necessary to achieve a final crime - sedition - which with the reform has declined from the Penal Code.

Arderiu, who is a lawyer for Forcadell - who was only convicted of sedition - has assessed that public disorder "are not applicable at all" to replace the disappeared sedition, as the Prosecutor's Office has raised.

In this sense, he recalled that in the review of the sentence, the facts that the sentence declared proven cannot be modified and that "they focus on the sedition modality of acting outside the legal channels, but they do not focus on the modality to act with force, violence or intimidation".

In the case of Forcadell, she was convicted of sedition for drawing up regulations in Parliament, which for Arderiu makes it "impossibly clearer" that it cannot be framed in disorder.

Regarding the order of the 1-O instructor Pablo Llarena, who agreed to withdraw the sedition but maintained the disobedience and embezzlement, Vilaret has described it as "a coup d'état, this interpretation that Llarena is making is obviating this desire for explicit reform of embezzlement".

"There is an evident open war, without nuances, not only with the reform of the Criminal Code but also with the law of 'only yes is yes'. There is a war of powers of this judiciary kidnapped by the right and the extreme right to maintain their margin of power", has assessed Vilaret.

‹ ›
Keywords:
ERCTribunal Supremo
Your comment has been forwarded to the administrator for approval.×
Warning! Will constitute a criminal offense, illegal, threatening, offensive, insulting and swearing, derogatory, defamatory, vulgar, pornographic, indecent, personality rights, damaging or similar nature in the nature of all kinds of financial content, legal, criminal and administrative responsibility for the content of the sender member / members are belong.
Related News