Remember that this is a matter pending resolution before the TGUE. 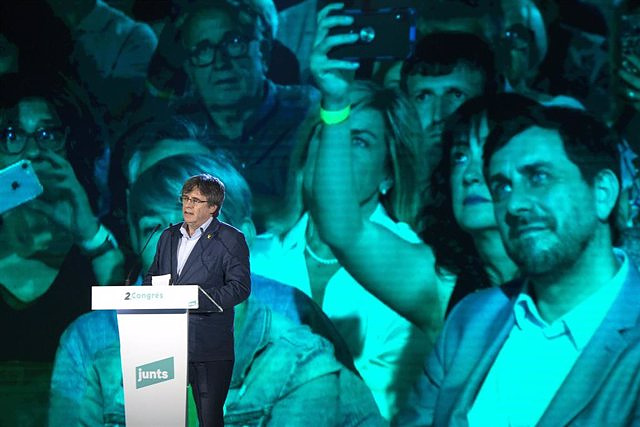 Remember that this is a matter pending resolution before the TGUE

The Plenary of the Constitutional Court (TC) has dismissed the appeal for amparo filed by the former Catalan president Carles Puigdemont and the former counselor Toni Comín against the decision of the instructor of the 'procés', the magistrate of the Supreme Court (TS) Pablo Llarena, of request the European Parliament to suspend their immunity as MEPs to be able to proceed criminally against them for 1-O.

As reported by the TC, Puigdemont and Comín intended to knock down the order issued on January 10, 2020 by Llarena where she requested the president of the TS to submit her petition to the European Parliament, as well as the judicial resolutions that confirmed that first.

In addition, they demanded that a preliminary ruling be raised to the Court of Justice of the EU (CJEU) on various matters, including some issues raised in the hearing that was held on November 25 before the General Court of the EU (TGUE), precisely , on the immunity of Puigdemont and Comín, and also on that of Clara Ponsatí.

The Constitutional Court has considered that there are procedural defects that prevent hearing complaints relating to the violation of Articles 24.1 of the Constitution (right to an ordinary judge predetermined by law, right to an impartial judge, right to a decision based on law), 25.1 (principle of criminal legality), 16 (ideological freedom), 20 (freedom of expression) and 21 (right of assembly and demonstration).

In relation to the main purpose of the amparo appeal --the alleged violation of the right to parliamentary immunity--, the TC explains that it has rejected it because the request for petition, considered in isolation, cannot be understood as an injury to the rights of the exercise of the representative function but as a constitutionally recognized guarantor institution.

The court of guarantees clarifies that, in this case, it will be the granting or refusal of the request for the act (purely parliamentary and non-jurisdictional) that will affect parliamentary immunity, although at the same time it stresses that this matter is not a matter of appeal of amparo before the TC but the object of the appeal pending resolution before the TGUE.

To this, it adds that it rejects the claims of Puigdemont and Comín because, once the request has been granted and a different procedure has been opened in another jurisdiction by the same appellants against said concession, the appeal for amparo has lost its raison d'etre and any resolution of fund would be ineffective.

‹ ›
Keywords:
Carles PuigdemontTribunal ConstitucionalTribunal SupremoParlamento EuropeoPablo Llarena
Your comment has been forwarded to the administrator for approval.×
Warning! Will constitute a criminal offense, illegal, threatening, offensive, insulting and swearing, derogatory, defamatory, vulgar, pornographic, indecent, personality rights, damaging or similar nature in the nature of all kinds of financial content, legal, criminal and administrative responsibility for the content of the sender member / members are belong.
Related News