The Constitutional Court will study the matter because it raises a legal issue of relevant social or economic repercussions. 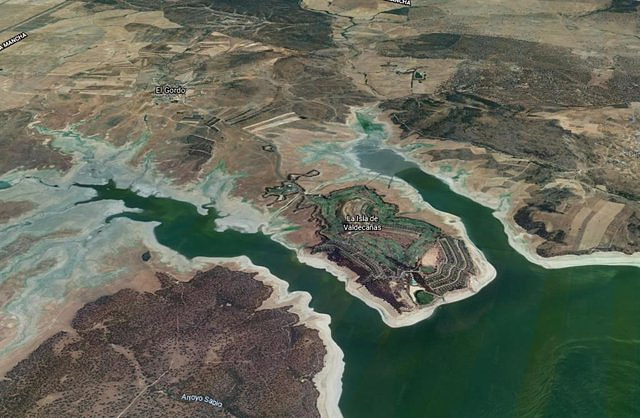 The owners of 'Isla de Valdecañas', an urban complex located in Cáceres, in the municipalities of El Gordo and Berrocalejo, have shown their satisfaction this Wednesday after admitting to the Constitutional Court (TC) the amparo appeals filed against the ruling of the Supreme Court that ordered its demolition.

For the owners of the complex, the decision that the Constitutional Court has made "reinforces" their "conviction" that the Supreme Court "went beyond the question raised when ruling on the demolition" and could violate the right to effective judicial protection.

In addition, they advance that they are going to request "immediately" the precautionary measure of suspension of the Supreme Court ruling that agreed to the demolition of the complex and at the same time remember that they keep another judicial front open with an extraordinary appeal for review before the Supreme Court itself and focused in which the declaration of ZEPA zone (zone of special protection for birds) "was never carried out".

In a statement collected by Europa Press, the owners point out that the question that the Supreme Court had to analyze was limited "exclusively" to assessing whether or not there were causes of material impossibility raised by the Superior Court of Justice of Extremadura to carry out an alternative execution.

"The owners acted in good faith from the beginning and we will defend the survival of the complex until the end," they say, while saying they are "fully backed" by the "majority" support of the people of Extremadura.

In the opinion of the owners, what is "at stake" is a "sustainable" economic and environmental model for the autonomous community of Extremadura. They believe that the 'Isla de Valdecañas' has brought prosperity to the region, "in need of opportunities and resources to deal with depopulation."

The 'Isla de Valdecañas', they emphasize in the statement, contributes to local and regional progress, "invigorates the territory" and encourages the creation of "hundreds of jobs and services in the area."

As reported today by the court of guarantees, the Plenary has admitted the appeals raised by the Junta de Extremadura, the communities of owners and the municipalities of El Gordo and Berrocalejo. The three have alleged a violation of the right to effective judicial protection and the right to a process with all the guarantees.

The Plenary has appreciated that the issues raised in these amparo appeals have special constitutional significance. On the one hand, it has considered that they can give the court an opportunity to clarify or change its doctrine as a result of a process of internal reflection. And on the other, the magistrates have considered that the matter transcends the specific case because it raises a legal question of relevant and general social or economic repercussion.

The complex was the subject of two judgments of the Superior Court of Justice of Extremadura in 2011, in which the decision approving the project adopted by the Junta de Extremadura was annulled and the restoration of the land was ordered to the situation prior to the approval of said construction project, a decision that was upheld by the Supreme Court three years later.

In 2021, once the process was opened, the high court of Extremadura declared the impossibility of executing the sentences on its own terms and agreed to its partial material execution, which implied the demolition of everything that is in the structure phase or is not finished. and in operation, as well as the conservation of the hotel, homes, golf course and facilities that are currently built and in operation.

This year, the Supreme Court upheld an appeal presented, considering that there were no causes justifying the impossibility of executing the sentences on their own terms regarding the demolition of what was built and in operation as well.

It is precisely against this Supreme Court resolution that the three amparo appeals were filed, which the Constitutional Court admitted for processing this Wednesday.