It rejects the PSOE's appeal against its decision not to investigate the role of the former general secretary of the PP in the espionage of Bárcenas. 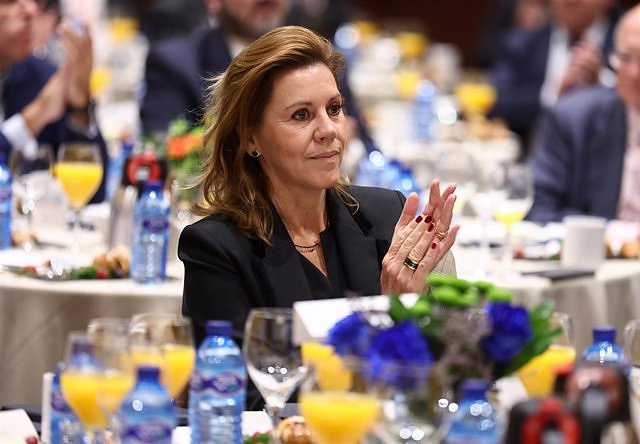 The judge of the National Court Manuel García-Castellón who is investigating the 'Operation Kitchen' has blamed the Anti-Corruption Prosecutor's Office for requesting that an bis piece be opened in that case to investigate the role of María Dolores de Cospedal in spying on the ex-treasurer Popular Luis Barcenas. He points out that this "mirror piece" is a claim "closer to the figure of legal fraud than to the function of the Public Ministry."

This is reflected in an order dated November 30, collected by Europa Press, in which it resolved to reject the appeal of the PSOE -- supported by the Prosecutor's Office -- which insisted on requesting that Cospedal's role be investigated. He tells the formation that whatever "proto-procedural" purpose he has as a party has no place in the proceedings.

"Taking into account that it is a political party (...) any other 'procedural' purpose that this party could have by intervening here is neither admissible nor justified," he asserts.

Thus, it stresses that it is not appropriate to open "a separate piece bis" of the Kitchen case, despite the fact that the PSOE maintained in its letter that Cospedal demanded "information" and gave "directives" on what should be done, participating "directly" in the spying on former 'popular' treasurer Luis Bárcenas.

Those of Pedro Sánchez also asked that the magistrate focus on the "relevance of the new audios" - leaked to the press - "because, if they were verified, they would exclude any type of doubt" about the involvement of the ex-minister.

García-Castellón points out that as he already said in a previous order from September, the support of the accusation against Cospedal "is reduced almost nuclearly to a few minutes of an audio cut of which not only its origin is unknown, but also any circumstance and context" .

He adds that he cannot share that, based on a statement made by Cospedal, it is inferred that he was aware of the spying operation on the PP treasurer.

Harder is, if possible, the magistrate with the Anti-Corruption Prosecutor's Office, which he accuses of requesting that bis piece, "a kind of mirror piece", and says that "this claim is closer to the figure of legal fraud than to the proper function of the Public Prosecutor's Office".

In line, remember that the Prosecutor's Office has among its functions to bring criminal action against people with respect to whom it understands that crimes have been committed and that these actions can be exercised by filing the appropriate complaint or complaint.

For this reason, he reasons, if the prosecutor believes that there are indications of the commission of crimes by Cospedal, he must specify them in a document and file a complaint substantiating the accusation. "In any case, they must be different from those that have already been evaluated and that determined the file," he reminds her.

After this refusal to investigate Cospedal, now it will be the Criminal Chamber who has the last word on whether the former general secretary of the PP should enter the case as an investigated. Which would mean that the political leg of the case would be added to the police leg.

In the letter by which the Prosecutor's Office adhered to the request of the PSOE, to which Europa Press has also had access, it was pointed out that the allegations of the appellant "are partly coincident with the position maintained by the Public Prosecutor's Office in its report dated 2 September 2022" since they were interested in the creation of that piece 'bis', the extension of the investigation period, attaching the new documentation to that piece, and taking a statement from both Cospedal and the former Secretary of State for the Interior, Francisco Martinez.

It indicates that, indeed, the appearance of new audios in the media are new facts that justify the reopening of the piece because they are relevant to the cause. "The new audios make constant references to the knowledge and monitoring of the development of the Kitchen operation by María Dolores de Cospedal and Mariano Rajoy Brei" --former president of the Government--, he recalls.

In fact, they assert that the content of the new published audios "is not consistent with what was declared in the instruction by the initially investigated María Dolores De Cospedal, since the recordings of her meetings would reflect that her true purpose of those meetings with the then commissioner Villarejo was to monitor the news and progress of the investigation of the Gürtel case."

They point out that he came "in the course of one of those meetings to give the police instructions to recover and make the little notebook of Luis Bárcenas disappear, whose annotations could affect irregular financing of the Popular Party."

Thus, they consider that the relevance of these new indicative elements "is unquestionable, and justifies the reopening of the provisionally dismissed investigation."

Regarding the origin of these audios, which determines "their suitability to be used as sources of valid and non-contaminating evidence of the investigation", the Prosecutor's Office refers to the information provided by Internal Affairs and which indicates that the retired commissioner José Manuel Villarejo He was the one behind the dissemination to the media.

On the other hand, the Public Ministry accused the magistrate's decision not to investigate Cospedal as "contradictory" because it assumes that there are new facts on the one hand, and on the other "insists that there would be no new facts because (...) they already the inconsequentiality of Villarejo's meetings with Cospedal was assessed".

And he adds that if the judge refuses to investigate these audios, he will not be able to know their origin or their suitability.

‹ ›
Keywords:
Audiencia NacionalMaría Dolores De CospedalLuis BárcenasCorrupción
Your comment has been forwarded to the administrator for approval.×
Warning! Will constitute a criminal offense, illegal, threatening, offensive, insulting and swearing, derogatory, defamatory, vulgar, pornographic, indecent, personality rights, damaging or similar nature in the nature of all kinds of financial content, legal, criminal and administrative responsibility for the content of the sender member / members are belong.
Related News