The magistrates accept that the defendants testify at the end of the trial, once the evidence against them has been carried out. 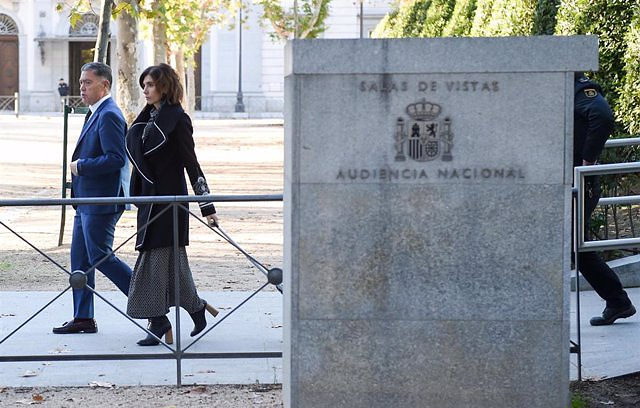 The magistrates accept that the defendants testify at the end of the trial, once the evidence against them has been carried out

The court of the National High Court that judges the part of the 'Punica case' relating to León and for which the supposed 'achiever' of the plot, the businessman Alejandro de Pedro, sits on the bench, as well as two ex-charges of the The Popular Party has suspended the oral hearing this Monday so that the defenses can study the new documentation provided by the Prosecutor's Office.

The president of the court, Judge Francisco Vieira, has agreed to what was requested by the representation of the accused and has chosen to "guarantee the right of defense to the maximum" and that there be "no doubt" regarding the procedure. "The court considers it reasonable to give them a few days so that they can study that documentation. The suspension is agreed and continues on November 28," he announced.

The calendar of the trial was scheduled to hold sessions from this Monday to Thursday in which the evidence was going to be presented. Vieira has summoned the parties to prepare to "continue holding the trial on subsequent days not initially planned", which could cause it to extend beyond the last scheduled date: December 1.

The magistrate explained that, "regardless" of the fact that the Public Prosecutor ensures that this documentary is "a summary or a conglomerate" of papers that organizes everything that has been done to date, the parties "have to verify" that this "corresponds to what the Prosecutor's Office itself says.

The court has adopted this decision amid protests by prosecutors María Teresa Gálvez Díez and Carmen García Cerdá, who have accused the lawyers who have requested the suspension of having arrived at the trial "without having done their homework." "Without wanting to offend, I say it: the documentation that we have incorporated must be known by you," they pointed out.

In this sense, the Prosecutor's Office has pointed out that the only thing they have intended with the contribution of this documentary is to "order the orders dictated by the instructor" in relation to the telephone interventions, contributing in turn the reports prepared by the Civil Guard in what relative to the listening itself.

In summary, the Public Ministry would only have "pretended that the room knows all the material that can serve as a basis to assess the legality of the interventions", which has been questioned by some of the defenses.

The representation of the main defendants has criticized that the Prosecutor's Office has carried out the "documentary births" without the parties having proof of these new papers, and that it would belong with other pieces of the 'Punic' macro-cause to which they do not have access.

This issue has caused a crossroads of reproaches that has led the president of the court to issue a warning. "Avoid, and I tell you for the rest of the trial, any reaction to the demonstrations that one or the other may make. We are going to maintain respect. They will have the opportunity at the time to express what they consider convenient," Vieira snapped.

Before agreeing to suspend the oral hearing, the court itself has resolved the preliminary issues raised in the first session, held last Thursday. In it, the defense of De Pedro himself urged to postpone the businessman's statement until after the practice of the evidence against him. It was a request to which other lawyers adhered and with which the accusations agreed.

"This court, if the accusations that are the ones that determine the order of evidence practice have no objection to testifying at the end of the trial, it will be agreed. It has already been announced that several witnesses will be summoned this Monday and it is agreed. It is altered the order of taking the evidence", the magistrate announced.

The court has also explained, in relation to the previous questions, that they will resolve all the alleged violations of rights invoked by the defenses in the eventual sentence that they will dictate once the trial is over.

‹ ›
Keywords:
Audiencia NacionalPPPúnica
Your comment has been forwarded to the administrator for approval.×
Warning! Will constitute a criminal offense, illegal, threatening, offensive, insulting and swearing, derogatory, defamatory, vulgar, pornographic, indecent, personality rights, damaging or similar nature in the nature of all kinds of financial content, legal, criminal and administrative responsibility for the content of the sender member / members are belong.
Related News