The accused of launching pyrotechnics at the Mossos helicopter: he did not want to "hurt any police"

The prosecutor reproaches that he gives an "unbelievable version of the facts". 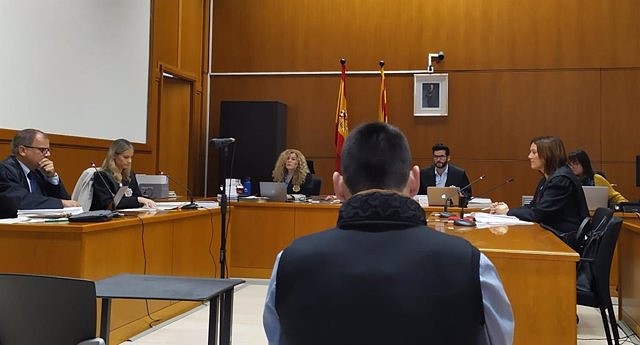 The man accused of launching pyrotechnics at the Mossos d'Esquadra helicopter during a demonstration in Barcelona against the sentence of 1-O has declared in the trial: "In no case did I go with the specific intention of harming any police officer."

"It is a commercial pyrotechnics that I use with my six-year-old son. There have been many lies here," he said in his last turn to speak in the trial that ended this Tuesday at the Barcelona Court.

The man's defense has insisted that it is not dangerous pyrotechnics, but that it emits light but is not characterized by a large detonation, and that it exploded at a considerable distance from the helicopter.

During his interrogation, the man has detailed that he launched three rockets in total and that, between the first and the second, the helicopter got closer to the area where he was.

"The rocket was launched vertically, it was not directed at any point. In fact, with this rocket, if you aim at a radius of five meters it is very difficult to miss", and he assured that he did not know that it was the Mossos helicopter, to Despite the fact that it was logotyped, because it was already night and he thought it could be from a media outlet.

In the trial session this Tuesday, the pilot of the helicopter also testified as a witness, who said that they heard the detonation of the rocket between 5 and 10 meters from them, and that then they were flying at about 300 feet -91 meters. --, something above the buildings.

He explained that they were flying so low to disperse the protesters and thus help the riot police who were trying to dismantle a barricade on the ground at the confluence of Gran Vía and Calle Bruch.

The pilot has said that during the day he heard several pyrotechnic rockets but that only one made them destabilize and forced them to change the flight.

The prosecutor, who has reproached the accused for giving an "unbelievable version of the facts", asks to sentence him to nine and a half years in prison for the alleged crimes of public disorder, attack and minor injuries for allegedly resisting when a Mosso tried to stop him.

For its part, the private prosecution of the Generalitat demands a two-year sentence for attack and minor injuries, and has highlighted that "launching rockets at the helicopter implies a risk that must be avoided."

‹ ›
Keywords:
PolicíaMossos DEsquadra
Your comment has been forwarded to the administrator for approval.×
Warning! Will constitute a criminal offense, illegal, threatening, offensive, insulting and swearing, derogatory, defamatory, vulgar, pornographic, indecent, personality rights, damaging or similar nature in the nature of all kinds of financial content, legal, criminal and administrative responsibility for the content of the sender member / members are belong.
Related News