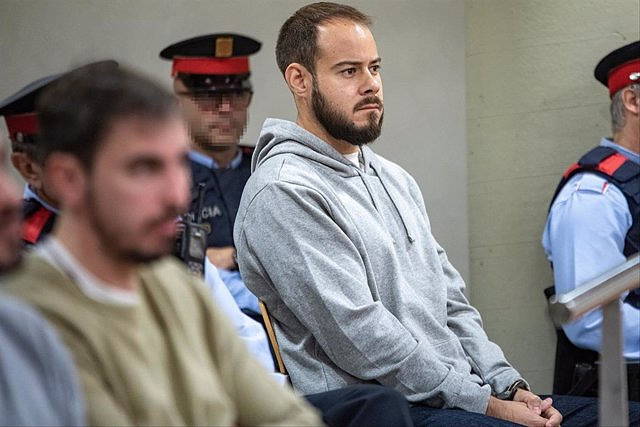 Four of the Mossos d'Esquadra injured in the demonstration on March 25, 2018 in Lleida for which rapper Pablo Hasel is being tried have assured that they do not know who attacked them and that it was one of the "hardest" days in their years of service.

They said it this Thursday in the second session of the trial in which they testified as witnesses in the Lleida Court, where Hasel is being tried along with ten other people for alleged crimes of public disorder, attack against law enforcement officers and injuries.

The agents have responded to questions from the prosecutor that they do not attribute specific facts to the defendants since there were many people "with a combative attitude" who shouted and made them move back, said one of the policemen.

"They threw everything at us: coins, water bottles, umbrellas..." declared a Mossos agent.

The Prosecutor's Office asks for Hasel five years and nine months in prison and, for the rest of the defendants, five years and three months, and four of them acknowledged the facts on Wednesday and accepted a nine-month prison sentence.

Hasel, who entered prison in February 2021 after being arrested to serve the sentence imposed by the National Court for glorifying terrorism and insulting the Crown, also testifies this Thursday.

‹ ›
Keywords:
Carles PuigdemontMossos DEsquadraPablo Hasél
Your comment has been forwarded to the administrator for approval.×
Warning! Will constitute a criminal offense, illegal, threatening, offensive, insulting and swearing, derogatory, defamatory, vulgar, pornographic, indecent, personality rights, damaging or similar nature in the nature of all kinds of financial content, legal, criminal and administrative responsibility for the content of the sender member / members are belong.
Related News