The president of the General Council of Spanish Lawyers appeals to continuous training as "an obligation". 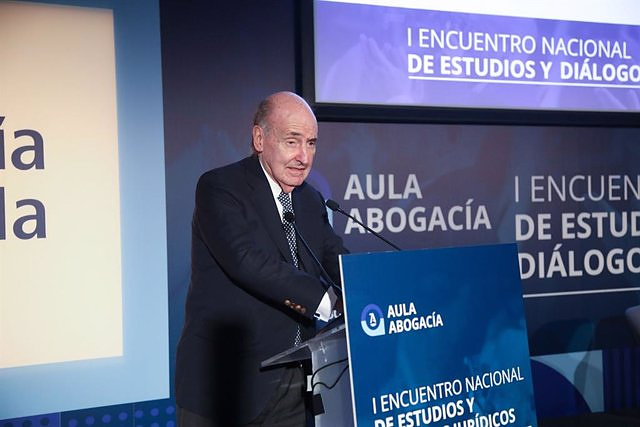 The rapporteur for the Constitution and president of the Roca Junyent law firm, Miquel Roca, warned this Tuesday of the risk of "trivialization of Law", stressing that "a society without lawyers only leads to totalitarian caprice", although at the same time he has urged lawyers to "rise up" in these times of "change".

"A society without lawyers only leads to totalitarian caprice. No one is going to replace us, neither machines nor anything, if we know how to carry out our profession as it should be carried out. We are a fundamental piece, but that requires being up to the task", said Roca, during the inauguration of Aula Abogacía, the First Meeting of Legal Studies and Dialogues, which is held between Tuesday and Wednesday in Madrid organized by the General Council of Spanish Lawyers.

Roca has defined the present as a time characterized by "the acceleration of change" to add that "we must not resist change, we must adapt to it and if possible lead it". "The Law must lead the change, give it shape, distribute it equitably. That is our function," she stated.

Along the same lines, the president of the General Council of Spanish Lawyers, Victoria Ortega, has indicated that "continuing training for the legal profession is not an option as before but an obligation", according to a statement collected by Europa Press.

This has been expressed in the framework of the first day of the Aula Abogacía, which is attended by half a thousand professionals and which will analyze the latest jurisprudential developments and the main legal reforms at the hands of 80 experts with the aim of "contributing to the training of legal professionals, but also to become a place of reflection for the entire legal sector".

Among the speakers there are fifteen magistrates of the Supreme Court (TS), such as César Tolosa, who will speak about the appeals; Andrés Martínez Arrieta, on tax crimes; Inés Huerta, on immigration; Juan María Diaz Fraile, about the truck cartel; Ángel Blasco, on the novelties in contracts and subcontractors in the labor reform; Antonio Jesús Fonseca-Herrero, on public contracting after the economic crisis; o Ricardo Bodas, on collective agreements. In addition, the former magistrate of the TS María Luisa Segoviano will analyze the new temporary employment regulation files.

The also magistrate of the TS Ignacio Sancho Gargallo has addressed this Tuesday the law of support for people with disabilities, exposing the modification of the support provision regime so that the rights of these people are facilitated to third parties. The lawyer María Xiol, for her part, has explained that voluntary support measures are a priority and take precedence over judicial measures.

In addition, regarding the labor reform, the labor lawyer Iñigo Sagardoy has highlighted that "it has had notable success in reducing temporary employment", for which reason he has considered that "the objectives have been met".

Likewise, in the matter of urban crimes, the magistrate of the Court of Cádiz Manuel Estrella has denounced that "the demolition orders are not usually complied with and the fines are derisory". "There are massive illegal urbanizations that have been built with the complicity of the competent administrations and it is difficult to explain what has to be demolished," he stated.

‹ ›
Keywords:
Roca JunyentEuropa Press Legal
Your comment has been forwarded to the administrator for approval.×
Warning! Will constitute a criminal offense, illegal, threatening, offensive, insulting and swearing, derogatory, defamatory, vulgar, pornographic, indecent, personality rights, damaging or similar nature in the nature of all kinds of financial content, legal, criminal and administrative responsibility for the content of the sender member / members are belong.
Related News