Llop refuses to clarify whether Justice set penalties in the 'yes is yes' law as Podemos denounces: "I was not in the Government"

The minister is confident that the Supreme Court will remove the "obstacles" that prevent the deployment of women's rights. 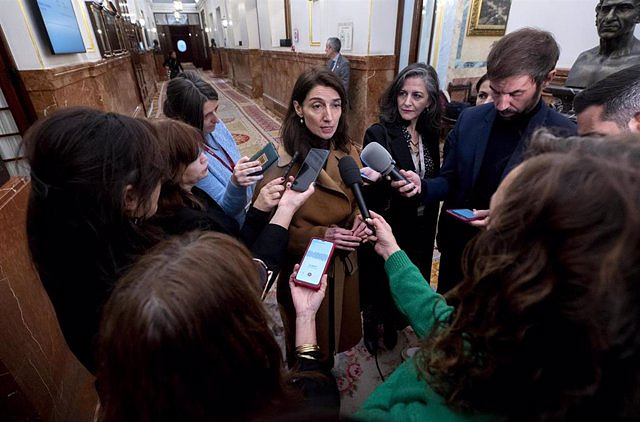 The Minister of Justice, Pilar Llop, has refused to clarify this Tuesday if it was her department, as Podemos denounced yesterday, who was in charge of establishing the range of penalties for the so-called 'law of only yes is yes', established by the Minister of Equality of Irene Montero, recalling that she was not part of the Government when the new norm was created, which for now has led to sentence reductions and releases.

"I was not in the Council of Ministers, but it is evident that I agree that it is a good law", he said in statements to the press after presenting the Justice item in the General State Budget (PGE) in the Congress of the Deputies.

However, it has assumed that a "debate" has been generated, which it has described as "strictly legal", on "the question of the application of penalties with the entry into force of the 'law of only yes is yes'" for the review of sentences, before which he wanted to send "a message of calm and tranquility" to the victims.

"It is a complex law that what it does is completely change the model we had in terms of sexual crimes by incorporating what were previously sexual abuse, attacks against sexual freedom without violence or intimidation, within the concept of sexual assault, and what What has been done is to broaden the penological fork", he explained.

In addition, he has highlighted that the decree issued on Monday by the State Attorney General, Álvaro García Ortiz, where he urges not to lower the sentences that remain in force with the new law, "in a certain way has shed light and is also shedding calm".

Asked about what the Government expects from the Supreme Court (TS), also called to rule on the new law, Llop has asked to "be prudent", "wait to see what the TS says, because it is also going to make some criteria of interpretive character or it will resolve it if it receives some kind of review of the sentence, some resource".

However, to questions from journalists, the minister has elaborated to indicate that she expects the same from the Supreme Court as from "all public powers": "That all obstacles that prevent or hinder the full freedom and security of women's rights".

"That is what all the public powers are obliged to do in matters like this that are purely gender-based, because in terms of victims they affect a very high percentage of women and girls, although there are also boys, and the aggressors are usually men" , has added.

In any case, he has emphasized that "it is important to focus on the victims, on their protection, which is what this law does", emphasizing that the Prosecutor's Office also underlined the "victimological dimension" as opposed to the "punitive dimension". .

Regarding the criticism launched from United We Can to the judiciary for the application of the 'law of only yes is yes', Llop wanted to "recognize the efforts of the hundreds of judges".

"We have 106 exclusive courts and 355 compatible ones throughout Spain in matters of violence against women who work daily, who leave their skin for the protection and safety of women, so value the work of judges, of the officials of the administration of justice, prosecutors, lawyers and specialized solicitors", he stressed.

Along the same lines, he highlighted the creation in 2003 of the Observatory against Domestic and Gender Violence, the General Council of the Judiciary (CGPJ), and the legislative modifications of previous governments and of the General Courts "so that judges can receive specialized training" in the fight against gender violence.

"It is important to value the fact that we have a State pact unanimously approved by all political forces in 2017," he added, immediately lamenting that, although it has been renewed this year, Vox has withdrawn for being "a force reactionary policy to all advances in the rights of women and other groups".