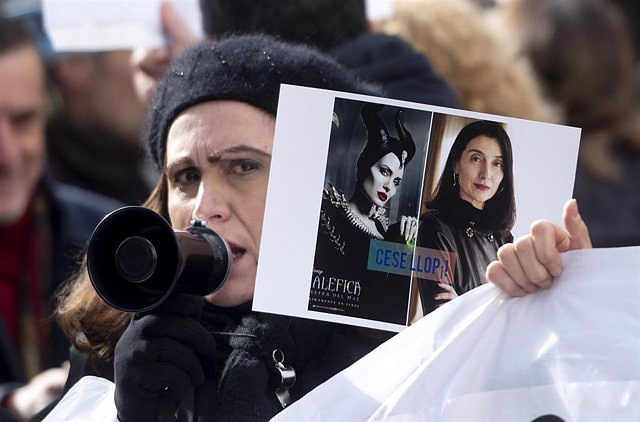 The Associations of Lawyers of the Administration of Justice (LAJ) calling for the indefinite strike have indicated this Wednesday that the follow-up on this second day has been majority, with around 80 percent of the workforce. One more day, these figures clash with the data offered by the Ministry of Justice, which says that 26.98 percent of all lawyers have supported the strike.

In a statement signed by the three convening associations, collected by Europa Press, it is explained that the participation has been similar to that of yesterday Tuesday -- the first day of the strike--. They regret that "the slightest attempt" by the Minister of Justice, Pilar Llop, to resolve the conflict continues without taking place.

"Incomprehensibly, it accepts the suspension of thousands of trials and appearances in all the judicial districts of the country, with the consequent damages for citizens, legal operators and for the public service itself," the associations indicate.

And they add that Llop is the one who must decide if "he accepts the hand that has been extended to him at all times to reach a satisfactory agreement that allows the commitments already acquired with the group to be fulfilled."

The conflict has its origin in "the lack of salary adequacy to the greater functions and responsibilities attributed by Law 13/2009, discharged to judges, and increased in successive reforms", especially that of 2015, which -they denounce- - has caused an "unbearable imbalance".

The conveners point out as a "trigger" of the conflict the agreement that the Ministry of Justice signed in December 2021 with the unions of the general bodies "without properly developing the salary adjustment to the latest procedural reforms provided for in the second paragraph of Additional Provision 157 of Law 11/2020 of General State Budgets for 2021".

The associations accuse Justice of prolonging and intensifying the conflict: "Not only has it not called the Strike Committee, (...) but it sets it on fire and inflames it, untruthfully in Parliament by stating (without accrediting) having complied with 10 of the 11 claims and 2 remaining pending, which does not even arithmetically correspond to reality".

LLop asked the conveners last Friday to flee from "maximalist positions" because they prevented "good agreements", ensuring that his Ministry permanently negotiates with the different LAJ associations.

In addition, he emphasized that these officials are a very important component for the proper functioning of the work of courts and tribunals, to ask them to be aware that whoever exercises a public function does so for the citizens.

That same day, the Ministry sent a letter to the LAJ signed by the Secretary General for Innovation and Quality of the Public Justice Service, Manuel Olmedo, in light of the "disinformation that apparently exists" about the actions carried out by the department "in interest" of the body.

Olmedo took stock of the objectives he proposed to achieve when he took office. He recalled that the first measure, linked to the modification of the royal salary decrees to make the union agreement adopted in December 2021 effective, was approved in April 2022 and represented a retroactive increase. "The fullness of the effects will be reflected in the payroll for this month of January, reaching an increase in supplements of 206.87 euros," he specified.

‹ ›
Keywords:
HuelgaMinisterio De JusticiaParo
Your comment has been forwarded to the administrator for approval.×
Warning! Will constitute a criminal offense, illegal, threatening, offensive, insulting and swearing, derogatory, defamatory, vulgar, pornographic, indecent, personality rights, damaging or similar nature in the nature of all kinds of financial content, legal, criminal and administrative responsibility for the content of the sender member / members are belong.
Related News