Alert on threats to judicial independence: "It is a collapsing building". 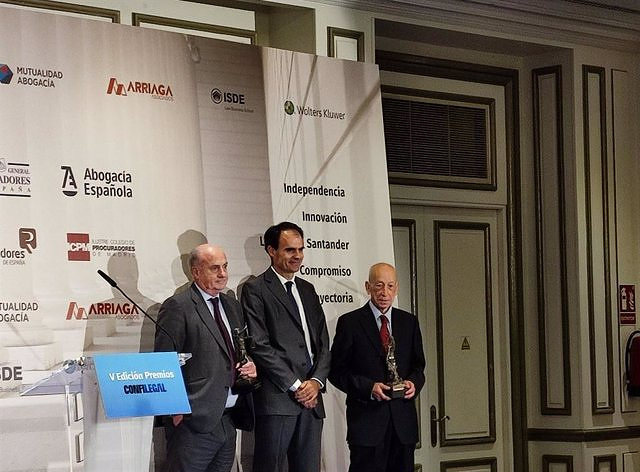 Alert on threats to judicial independence: "It is a collapsing building"

The judge of the National Court Manuel García Castellón has vindicated this Wednesday judicial independence in the face of "fierce criticism" and the "attacks" directed against the judiciary for the revision of the sentence that some magistrates have already made due to the entry into force of the 'law of only yes is yes'.

The head of the Central Court of Instruction Number 6 has dedicated the prize for Independence that Confilegal has awarded him --and that he has shared with the former president of the Fifth Section of the Provincial Court of Madrid Arturo Beltrán-- to his "companions" of the Court of Madrid itself.

"They are having a very bad time, they and other colleagues who do not go out. I want to dedicate this award to them," said García Castellón, who recalled that Spain belongs "to a part of the world" that is not "aware" that it is "privileged".

And it is, he explained, because on the other side of the planet "there are billions of people subjected to radical dictatorships." "The citizens there do not know what judicial independence is, they have not known it, and we have it. That is why we must take care of it every day," she stated.

In this line, the AN magistrate has insisted that the "attacks on the independence" of the judges "are dangerous", especially if they are directed against a "building", that of Justice, which is "in collapse". . Thus, he has called for claiming independence "not only against others, be they other powers" of the State, but "also against oneself."

García Castellón has expressed himself in this way the same day that the Minister of Equality, Irene Montero, has assured that machismo "can cause there to be" magistrates who "wrongly or defectively apply" the Law of Guarantee of Sexual Freedom.

On the other hand, Confilegal has awarded the Innovation Award to the Fundación Mutualidad de la Abogacía at the gala held this Wednesday, and the Legal Tech Santander Award to the Director General of Digital Transformation of the Ministry of Justice, Aitor Cubo.

In addition, the former president of the Social Chamber of the Supreme Court, María Luisa Segoviano, has been recognized with the Commitment Award.

Finally, the media specialized in the legal field has awarded the Lifetime Achievement Award to Constitutional Court magistrate Enrique Arnaldo and the Commitment Award to the late Landelino Lavilla, who was Minister of Justice and President of the Congress of Deputies.

The person in charge of awarding this last award to Lavilla's son has been the Minister of the Presidency, Justice and Interior of the Community of Madrid, Enrique López, who has celebrated that the work of a lawyer has been recognized "in difficult times" and despite that "some are determined to question the work of people" like the former minister.

López, who has highlighted Lavilla's work in an essential aspect for democracy, wanted to appeal to the political class. "Politicians are adversaries, but we should never be enemies," he has settled.