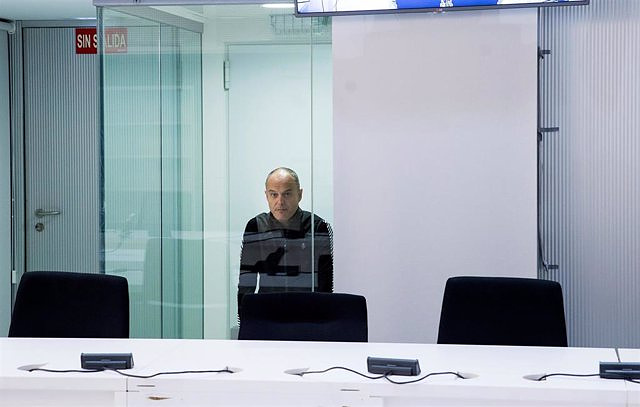 The Dignity and Justice association (DyJ) has requested that a 30-year prison sentence and absolute disqualification be applied to ETA members Mikel Kabikoitz Carrera Sarobe --alias 'Ata'-- and Miren Itxaso Zaldúa Iriberri --alias 'Sahatsa'- - For an alleged crime of terrorist murder committed in 2001 against the former president of the PP of Aragon Manuel Giménez Abad.

In a letter, to which Europa Press has had access, DyJ has also demanded that both ETA leaders be deprived for 10 years of the right to go to the city of Zaragoza and to the place of residence of the widow and children of Giménez Abad, as well as to communicate or approach them.

The association has also requested that they be forced to jointly and severally compensate the widow and each of the four children of the PP leader with 150,000 euros.

In the 10-page brief, Dignidad y Justicia has reviewed the facts. As he stressed, Carrera Sarobe and Zaldúa Iriberri --at least since 2001-- were part of the Basajaun Command and "they both decided to kill Don Manuel Giménez Abad, at that time, Deputy in the Autonomous Courts of Aragon, Senator for the Party Popular and president of the Popular Party of Aragon".

The association has ensured that the defendants --"for the execution of this preconceived plan and achievement of the objective"-- traveled to the city of Zaragoza where, at about 6:30 p.m. on May 6, 2001, when Giménez Abad was walking with one of his sons to a football match at the La Romareda stadium.

DyJ has had an impact on the fact that that afternoon Carrera Sarobe approached the PP leader and "shot him in the back and point blank, with no possibility of reaction and defense", all of this "in the presence of his underage son". As the association recalled, responsibility for the action was claimed by the terrorist organization in a statement published in the newspaper 'Gara' on July 26, 2001.

Within the framework of the requests made for the oral trial that the two ETA members are facing, Dignidad y Justicia has requested that the two defendants and a series of agents of the National Police, the Civil Guard and the Zaragoza Local Police be questioned , as well as several protected witnesses. The association has also requested that a statement be taken from the experts.

It should be remembered that 'Ata' already has two life sentences in France for the murder in 2010 of the French gendarme Jean Serge Nerin, who was the last fatality of the gang, and of the civil guards Raúl Centeno and Fernando Trapero in Capbreton in 2007 Specifically, the neighboring country established life imprisonment with the obligation that he spend at least 22 years in prison.

The ETA member was arrested on May 20, 2010 in a flat in Bayonne (France) together with two of his collaborators. He belonged to the tough sector of the ETA leadership and was a faithful ally of 'Txeroki', then in charge of commandos, in the confrontation he had with the late Javier López Peña, 'Thierry', the man who from the leadership of the 'political apparatus ' frustrated the negotiation with the Government of José Luis Rodríguez Zapatero.

‹ ›
Keywords:
ETATerrorismoPPCrímenes
Your comment has been forwarded to the administrator for approval.×
Warning! Will constitute a criminal offense, illegal, threatening, offensive, insulting and swearing, derogatory, defamatory, vulgar, pornographic, indecent, personality rights, damaging or similar nature in the nature of all kinds of financial content, legal, criminal and administrative responsibility for the content of the sender member / members are belong.
Related News