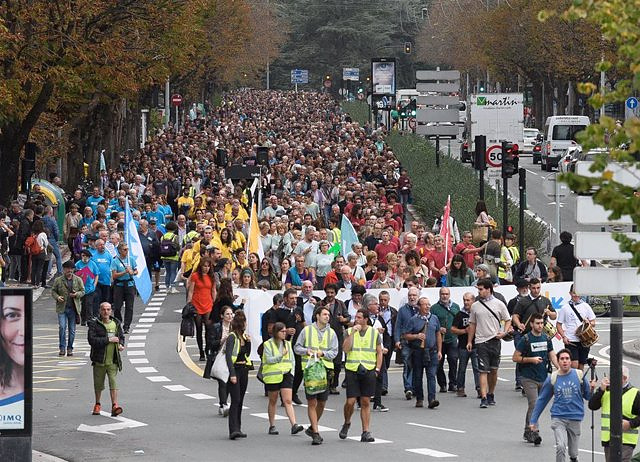 The Asociación Plataforma de Apoyo a las Víctimas del Terrorismo (APAVT) has presented before the Central Court of Instruction of the National Court (AN) a document in which it requests the prohibition of the concentration called by SARE on January 7 in Bilbao in defense of ETA prisoners under the slogan 'Etxera bidea Gertu' ('The road home is near).

In a statement, APAVT denounces the link between the concentration and what they call "Operation Almendro". According to this platform, said operation is "led by President Pedro Sánchez and his Minister of the Interior, Fernando Grande-Marlaska", and consists of "finishing the approach of ETA prisoners to the Basque Country before Christmas", which is "at about to be fulfilled."

APAVT recalls that the call by SARE, a platform in support of ETA prisoners, alludes to the fact that "we have made progress". "Sánchez and Marlaska can confirm that the murderers and their families are very happy," they maintain.

As on other occasions, the platform urges the National Court to prohibit this concentration on the understanding that it incurs "an exaltation and public justification of terrorism." "In the background, there is a demand for the release of prisoners who, let us not forget, are serving sentences for very serious crimes."

APAVT requires the National Court to direct letters to the Civil Guard, the National Police and the Ertzaintza so that they issue reports on the conveners of the SARE concentration, in order to determine if "any illegal organization was behind it".

‹ ›
Keywords:
TerrorismoBilbaoAudiencia NacionalETA
Your comment has been forwarded to the administrator for approval.×
Warning! Will constitute a criminal offense, illegal, threatening, offensive, insulting and swearing, derogatory, defamatory, vulgar, pornographic, indecent, personality rights, damaging or similar nature in the nature of all kinds of financial content, legal, criminal and administrative responsibility for the content of the sender member / members are belong.
Related News