Attends the precautionary measure requested by the Christian Lawyers association that considers that it supposes "the exaltation of a political party that committed crimes". 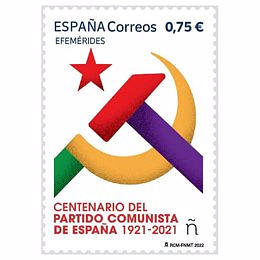 A judge from Madrid's Contentious-Administrative Court 30 has decided to provisionally suspend the issuance of the Correos stamp commemorating the centenary of the Communist Party of Spain (PCE), according to 'La Vanguardia'.

The magistrate thus attends to a request presented by the Christian Lawyers to paralyze the postage stamp.

From the association they have confirmed to Europa Press that they have not yet received the official notification but the president of Christian Lawyers, Poland Castellanos, has celebrated the magistrate's decision, considering it "intolerable" that public administrations are used to "promote an ideology" .

"Issuing this stamp goes against the duty of neutrality of public administrations, the law of historical memory and even the resolution of the European Parliament", he added.

In addition, Christian Lawyers assures that "it supposes the exaltation of a political party that committed crimes and persecuted thousands of people solely because of their faith." For this reason, he has argued that "issuing this stamp is contrary to the Democratic Memory Law and the resolution of the European Parliament that condemns the exaltation of Communism."

Correos announced the issuance of this commemorative stamp of the Communist Party of Spain (PCE), which would have a print run of 135,000 copies and cost 0.75 euros starting next Monday.

The Popular Party, Vox and Ciudadanos censored this Thursday the decision of Correos to issue a commemorative stamp of the first centenary of the PCE, even asking for the resignation of its director, Juan Manuel Serrano.

"It's a shame. Remove it," PP senator Rafael Hernando immediately claimed, warning that "communism, Nazism, and fascism are totalitarian ideologies condemned by the European Parliament and that caused millions of deaths."

Vox also denounced that the history of the PCE is "of violence, Czechs, walks, hatred and totalitarianism" against all Spaniards, "including those on the left." For this reason, he believes that the best tribute would be "for young people to learn about their criminal and genocidal past without manipulation"; and he proposes as an alternative that the stamp commemorates the 86th anniversary of the Paracuellos massacre.

Likewise, Ciudadanos demands the resignation of the president of the Post Office, since it believes that commemorating the century of life of the Communist Party "is commemorating hatred, crime and misery." "It also contravenes the 2019 European resolution on communism and Nazism. It stains the image of Spain and it is a shame," the 'oranges' warned.

‹ ›
Keywords:
Correos
Your comment has been forwarded to the administrator for approval.×
Warning! Will constitute a criminal offense, illegal, threatening, offensive, insulting and swearing, derogatory, defamatory, vulgar, pornographic, indecent, personality rights, damaging or similar nature in the nature of all kinds of financial content, legal, criminal and administrative responsibility for the content of the sender member / members are belong.
Related News