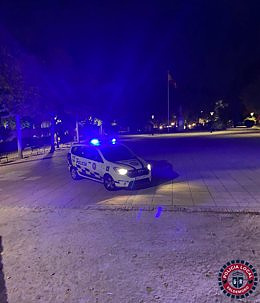 A father and son were unharmed this past Saturday after an elevator collapsed, with them inside, to the first floor of a Valdemoro building, as reported by the Local Police on social networks.

The event took place in a building located on Venus street. The father and son were trapped and in order to get out they required the intervention of the Emergency and Civil Protection services, as well as that of the Madrid Community Fire Department.

A few days before, the Local Police filed a complaint against the worker of an industrial warehouse in the Rompecubas industrial estate for carrying out "activity without a license". The defendant repaired a vehicle working as a mechanical workshop, causing damage to it, as reported by Jefatura.

On the other hand, the agents intervened in an accident on the M-404. In the accident, a car overturned, cutting a lane. His driver left the area, and the agents managed to locate him on a nearby road. The Traffic Civil Guard took over the investigation, while Summa 112 assisted the injured driver.

Finally, in the Valderremata industrial estate, the Police investigated a man as the alleged perpetrator of a crime of electricity fraud and another crime of damage. After manipulating the electrical panel on the façade of the cemetery, the person went out on fire, which left the cemetery and the funeral home without lighting. Firefighters from the Community of Madrid had to put out the flames.

‹ ›
Keywords:
Policía
Your comment has been forwarded to the administrator for approval.×
Warning! Will constitute a criminal offense, illegal, threatening, offensive, insulting and swearing, derogatory, defamatory, vulgar, pornographic, indecent, personality rights, damaging or similar nature in the nature of all kinds of financial content, legal, criminal and administrative responsibility for the content of the sender member / members are belong.
Related News