Zaragoza, Ibiza and Racing achieve their first win and Andorra draw in Anduva

Huesca beat Málaga (1-0), Andorra scratched a tie at Anduva in discount time and Racing woke up at El Molinón with a hard-fought win (0-2). 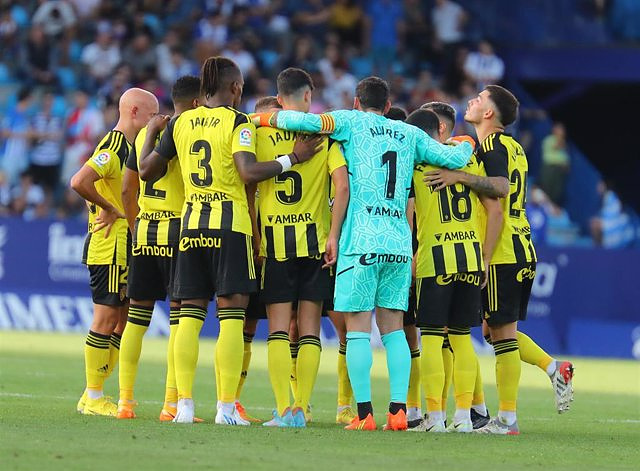 Huesca beat Málaga (1-0), Andorra scratched a tie at Anduva in discount time and Racing woke up at El Molinón with a hard-fought win (0-2)

This Sunday, UD Ibiza and Racing achieved their first victories in LaLiga Smartbank against Tenerife and Sporting de Gijón, respectively, on matchday five in which Zaragoza returned to the path of victory (1-2) against Ponferradina, Huesco victorious (1-0) against Málaga and Andorra started a tie (1-1) at Mirandés with a goal in added time.

Giuliano Simeone led Zaragoza's first win this season at El Toralín, with a brace in the 1-2 draw against Ponferradina. He was able to do some more against the sports team, which continues with doubts and a pressing lack of goals. The Argentine striker was a headache for the Leon defense, and quickly opened the scoring with a goal in the 12th minute.

The 'Ponfe' was still lost and stuck, but a shot from 30 meters by Nwakali, the most outstanding in the Bercian team, surprised the Aragoza goalkeeper Cristian Álvarez, who could not stop the ball that went into the squad. The second and definitive goal came in a similar way to the first, just at the beginning of the second half, when Simeone took advantage of an assist from Fuentes, who he left alone in a corner to shoot the goalkeeper.

UD Ibiza also achieved its first victory, thanks to an own goal by the Tenerife Mellot player that ended up deciding the match in favor of the Ibizans. On the day of Nolito's debut with the Balearic team, the start of the duel was slow and exhausting for the fans, with no clear chances or threats for the goalkeepers.

Ibiza was able to take the lead before the break with a great opportunity for Darío Poveda who went to the side of the net. The home team continued to improve and found the prize in the 63rd minute with Mellot's own goal. Tenerife tried until the end, but finally the three points stayed on the island, to get out of relegation, one place below Tenerife, which is 17th.

On this fifth day of the Second Division, Racing de Santander's first victory also came at El Molinón, against a Sporting team that had not lost in the previous four days. The game started quite slowly and the first chances were slow in coming. It wasn't until the 30th minute when Gassama made it 0-1 to put the match on track for the Cantabrians.

The locals only had a couple of opportunities in the second half, with the 0-2 in the discount to sentence and tie that first victory. Sporting breaks its unbeaten record and is eighth, while Racing is still in the fight to get out of relegation and is 20th.

In Anduva, Mirandés continues without a win and received another blow in the final minutes of the game against Andorra, which added a well-deserved equalizer with a goal in the 98th minute from Bakis, who came on in the second half. Eder Sarabia's men finished the match with one less due to the expulsion of Dani Morer. This equal result leaves Mirandés bottom, while the team from the principality is fourteenth.

Finally, Huesca deepened the wound of an irregular Málaga in this league start, winning the last game of the day by 1-0. Ziganda was right with the changes in the second part of the duel and Juan Carlos scored the winning goal, which places them tenth in the table, while the Andalusian team continues in free fall and is penultimate.

‹ ›
Keywords:
Gijón (ciudad)IbizaSporting De Gijón
Your comment has been forwarded to the administrator for approval.×
Warning! Will constitute a criminal offense, illegal, threatening, offensive, insulting and swearing, derogatory, defamatory, vulgar, pornographic, indecent, personality rights, damaging or similar nature in the nature of all kinds of financial content, legal, criminal and administrative responsibility for the content of the sender member / members are belong.
Related News