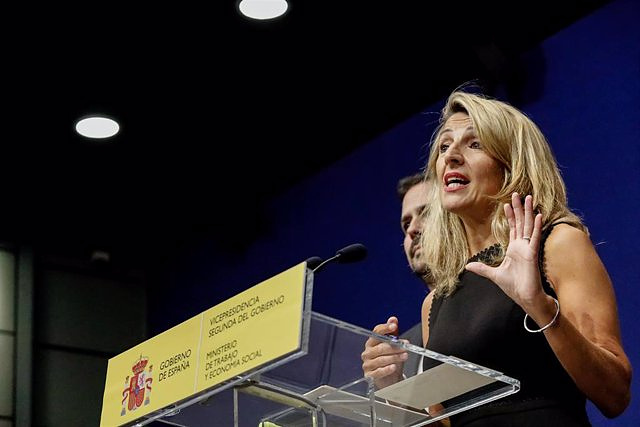 The second vice president, Yolanda Díaz, has stated that she informed the President of the Government, Pedro Sánchez, and the Minister of Agriculture, Fisheries and Food, Luis Planas, of her initiative to seek an agreement with large distributors to cap prices of basic food products in the shopping cart.

This has been transferred in statements to the media prior to a meeting with domestic workers to present the decree to improve working conditions and Social Security for employees in this sector.

Questioned, after hearing some divergent voices in the PSOE about this initiative, about whether she had spoken with Sánchez and Planas about this matter, her words were forwarded at the press conference this morning after meeting with Carrefour officials, to later add that the "answer is yes".

The also head of Labor has assured this Thursday after this appointment that the shopping basket of basic products with "frozen" or limited prices that she is demanding from large distribution must vary every week, include proteins and fresh (fish, meat, fruit , eggs and vegetables) and be available to families at least until after Christmas. Likewise, she has requested that a specific basket for celiacs be offered.

The vice president has reiterated in that appearance that what she is pursuing is to promote an agreement between the large distributors "at a time of absolute exceptionality, due to inflation and knowing that it is the large ones that have business margins to be able to carry it out".

And it is that Robles had reproached the vice president for not respecting the powers of the Minister of Agriculture with his proposal and that, in addition, "he wants to patrimonialize" being with the most vulnerable.

In contrast, the Minister of Territorial Policy and Government spokesperson, Isabel Rodríguez, has avoided discussing the Defense Minister's criticism of Díaz and has limited herself to commenting that all proposals are welcome to be analyzed.

On the other hand, the Ministry of Economic Affairs has rejected Díaz's initiative and sources from that department believe that competition in the market should be left to work instead of agreeing with large distributors to set prices for basic products of the shopping basket.

‹ ›
Keywords:
Pedro SánchezAgriculturaPescaLuis PlanasYolanda Díaz
Your comment has been forwarded to the administrator for approval.×
Warning! Will constitute a criminal offense, illegal, threatening, offensive, insulting and swearing, derogatory, defamatory, vulgar, pornographic, indecent, personality rights, damaging or similar nature in the nature of all kinds of financial content, legal, criminal and administrative responsibility for the content of the sender member / members are belong.
Related News