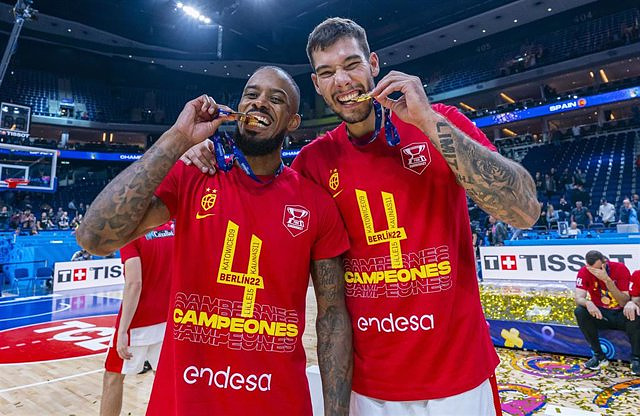 The center of the Spanish team Willy Hernangómez, named 'MVP' of Eurobasket 2022, assured that they deserved "this gold medal" for the way they prepared "from the beginning" and how they have "grown during the tournament", in addition to be "very proud of how he has grown" his brother Juancho, named best player in the final against France.

"It's hard to explain in words. I feel very proud of my teammates, my coaching staff, the entire Spanish federation from top to bottom. We deserved this medal, this gold medal, because of the way we prepared from the beginning, the way in which we have grown during the tournament. It has been something great", commented the Madrilenian in the press conference after the final.

The oldest of the Hernangómez family valued "the confidence that was there" in the locker room to achieve victory. "There was something special and I am very proud and I feel very lucky to be together with these guys, because they have trusted me from the beginning. I am very grateful to be part of this great team and to be trained by Sergio (Scariolo). He has trained for many years, he has pressured me to be better," he deepened.

Willy Hernangómez was also "very proud of how his brother has grown" during the tournament. Juancho scored 27 points and was named the best player in the final, in which he scored a whopping nine triples. "We trusted him from the beginning, he knew it, he had to let the game get into him and we needed him today and he was ready for us. Today it was Juancho and not Bo Cruz," he assured.

"We are two brothers who come from a humble family from a town in Madrid, from Las Rozas, our family has instilled in us values ​​that, through work, effort and sacrifice, dreams can come true. My brother and I have As kids we always dreamed of playing basketball, we never thought we could play in the ACB, we never thought we could have been in the NBA for seven years," he said.

The man from Madrid pointed out that they will continue "working in the shadows" and "trusting their work together with their environment to continue growing. "For us it is a dream to play with the national team, to have been world champions. Having now been European champion together with my brother is something unique", he acknowledged.

All this, for Willy, "shows that anything can be achieved with effort, with sacrifice" and that "above all you have to keep dreaming". "Someone can't tell you that you're not going to get anywhere, you're just the one who sets limits and barriers," said the New Orleans Pelicans center.

During the appearance with their coach, the rest of the squad came in to douse them with bottles of water in a celebration where Scariolo joked that he couldn't imagine Juan Carlos Navarro and Pau Gasol doing the same thing. "This did not happen a few years ago. I think the group is very happy, super happy with what has been achieved and it is not for less, so any celebration will be little," concluded Hernangómez.