Post a Comment Print Share on Facebook
Famagusta 24
DOLLAR 18,59
EURO 18,09
GOLD 1.012,32
BIST 3.567,60
Dogecoin Spike Fuels Meme Token Economy to a Huge Jump of Close to 10%
Report: Only 5.3% Spanish Crypto Investors have been notified to declare...
Why casinos do not allow kids to gamble
Payments giant Stripe launches pilot to test crypto payouts with Twitter
Vlad Ponomarev, CEO of Broxus, on Everscale and the Development of a Universal...
Quik.com now has Minting of.VR and.Metaverse Domains
The Biggest Movers: APE Up Almost 30%, ZIL, and AAVE are Wednesday's...
Paul Farhi, founder of Solidus AITECH, talks about Artificial Intelligence...
Malaysia holds over 600 people for stealing electricity to mine cryptocurrency
Central Bank of Sudan warns of risks associated with cryptocurrency

He insists in a meeting with Teresa Ribera on the urgency of limiting mortgage loans just as was done with gas. 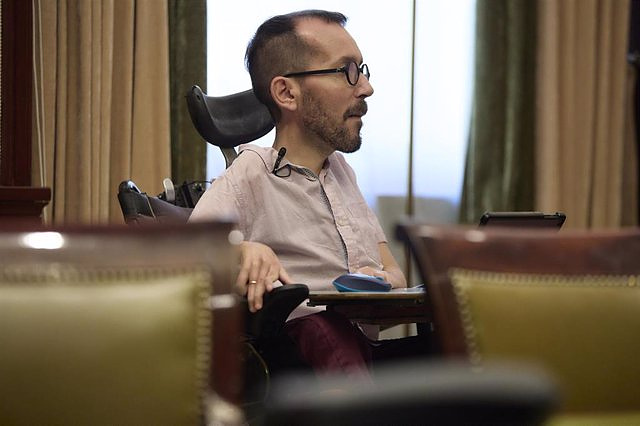 The spokesman for United We Can, Pablo Echenique, has positively valued that the head of the Treasury, María Jesús Montero, is open to the possibility of raising taxes on large fortunes, as he has done with energy and banking, as his group proposed in June in Congress although, then, it was rejected.

He also has the "hope" that the PSOE changes its mind and accepts the proposal launched by the purple formation to establish a temporary cap on the rise in variable-rate mortgages, because it is an "urgent" matter in which it has to act government.

This has been indicated in statements to the media moments before holding a meeting with the third vice president and head of Ecological Transition, Teresa Ribera, where she will precisely demand that it be accepted to limit the rise in variable-rate mortgage loans for one year to the 0.1%, which would mean a saving in the monthly fee of 150 euros.

The proposal of the purples is that this initiative be introduced in the next contingency plan or in the current one that is in the parliamentary process with the amendment phase.

In this way, Echenique hopes to convince of the relevance of applying this limit to mortgages, because the Executive has not acted to "relieve the bill" of the mortgage, in the midst of an upward trend in Euribor, as it has done with gas or electricity bill. "We don't want to be right in a few months," he added.

And also, with the debate on taxation in the background in recent days on the harmonization of taxes, he was pleased to hear that the head of the Treasury is no longer closed to the possibility of a tax on large fortunes, which his formation demanded in Congress through a bill.

Then, the confederal group demanded to create a state tax on large fortunes, complementary to that of Patrimony and directed to the sum of assets above ten million euros. To this end, he advocated a new tax scale with eight brackets and rates, from 3.6% to 5%, taking into account whether the taxpayer pays through Wealth Tax.

Returning to the issue of mortgages, Echenique has remarked that the war in Ukraine seems to be "long" and may "enter an escalation of the war", with which it is necessary to protect families from its socioeconomic consequences and from the great increase that experience these credits, with an increase in Euribor that represents 200 euros more in the monthly payment of households.

He has also reaffirmed that they will be "very insistent" with other measures not accepted by the PSOE, such as applying a progressive domestic electricity bill that further penalizes households with high consumption, and the creation of new green taxes on polluting vehicles. such as yachts, private planes or high-capacity luxury cars.

"In recent months you were told that it was impossible to put an extraordinary tax on banks and electricity companies, or to put a tax on large fortunes. Our obligation is to insist and that on the subject of energy saving it is evident that a millionaire person spends a lot more energy than a working person", he settled.

‹ ›
Keywords:
AEATPSOEPodemosPablo EcheniqueMaría Jesús Montero
Your comment has been forwarded to the administrator for approval.×
Warning! Will constitute a criminal offense, illegal, threatening, offensive, insulting and swearing, derogatory, defamatory, vulgar, pornographic, indecent, personality rights, damaging or similar nature in the nature of all kinds of financial content, legal, criminal and administrative responsibility for the content of the sender member / members are belong.
Related News