He rules out taking his measure to the budget negotiation because they urge it to be approved beforehand, in the next contingency plan. 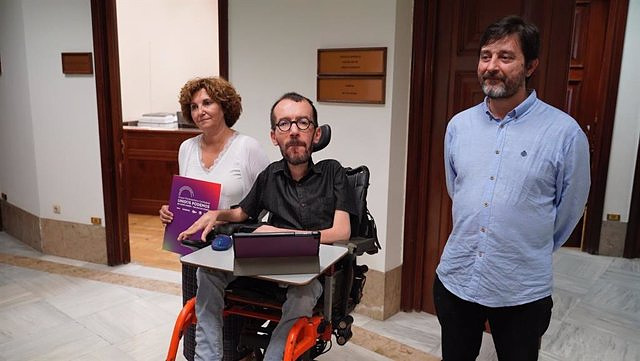 He rules out taking his measure to the budget negotiation because they urge it to be approved beforehand, in the next contingency plan

United We Can has registered in Congress its bill to set a temporary cap on the rise in variable-rate mortgages for vulnerable families and has demanded the PSOE, its coalition partner, to negotiate and accept its proposal because it is urgent to react to the inflationary drift.

Of course, he has stressed that they do not conceive this point as a requirement in the negotiation of the next General Budgets because they think that its approval should be faster and be included in the next contingency plan decree, given that the future public accounts would not be approved until the end of the year and that would be "too long to wait".

This has been transferred to the media by the spokesman for the confederal group, Pablo Echenique, and the deputy Pilar Garrido after formalizing the registration of their initiative, which urgently needs to be applied in the face of the "bullish rally" in interest rates and which entails a problem for the "sustainability" of the family economy and for the "stability" of the financial system itself.

The minority partner of the coalition has already advanced its plan to register a bill after previously sending the PSOE the main lines of this mortgage ceiling, which proposes limiting the increase in mortgage loans to 0.1% for one year and, with this, reduce the monthly fee that families support by up to 150 euros.

And it is that Echenique has been "surprised" by the reaction of his partner, ruling out that possibility, as President Pedro Sánchez himself stated, when there is no community regulation that makes it impossible to limit the types of variable mortgages and when, in addition, his approach "It is not maximum" but "moderate" and balanced" so that it would be "easier" to assume it.

Therefore, and after emphasizing that his formation is in favor of dation in payment and the prohibition of evictions, he has summoned the PSOE to dialogue because it is "almost a custom" that they present a measure to protect families, they are told that it is "illegal" as happened with the gas cap and that it is then adopted after a few months.

In turn, the text prepared by United We Can argues that the rate hike, which is already around 2%, will have a "great impact" on households in the face of the negotiation of conditions between clients and financial institutions in the coming months.

Specifically, the legislative proposal is limited to families in a situation of vulnerability and based on the conditions already established to deploy the mortgage moratorium during the pandemic, by establishing as beneficiaries of the measures with income equivalent to three times in the IPREM for the unit family, along with other requirements.

And it is that the spokesman for United We Can has warned that the rise in mortgages is going to be a "serious problem for the country" with monthly increases of 200 euros for an average mortgage, which affects the family economy and can, in addition, increase delinquencies, non-payments and touching the very stability of the banking system.

Moreover, he has predicted that this measure will surely be the first of many given the upward trend of the Euribor and there is a risk of a "structural" and "systemic" problem.

For her part, Pilar Garrido has insisted that in the face of this "exceptional" situation, "urgent and forceful measures" are needed, but also moderate in this case, which protects both banks and households.

In this way, he has stated that financial entities can assume this limit after registering more than 20,000 million euros of extraordinary profits last year.

"They are asked for co-responsibility" added the parliamentarian, who has called not to fall back as in the 2008 crisis in situations of loss of housing, especially when then the banks were rescued.

‹ ›
Keywords:
PSOEPodemos
Your comment has been forwarded to the administrator for approval.×
Warning! Will constitute a criminal offense, illegal, threatening, offensive, insulting and swearing, derogatory, defamatory, vulgar, pornographic, indecent, personality rights, damaging or similar nature in the nature of all kinds of financial content, legal, criminal and administrative responsibility for the content of the sender member / members are belong.
Related News