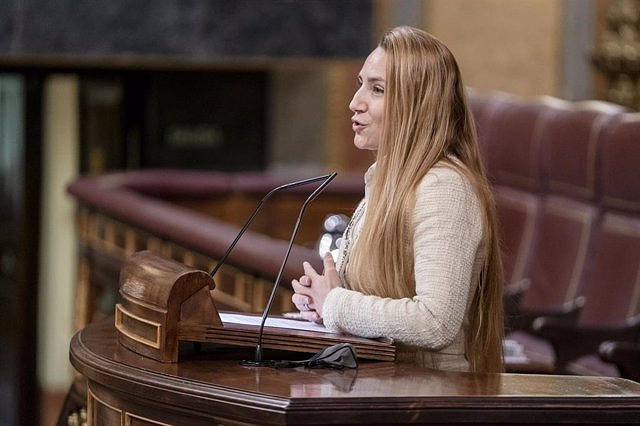 The president of the Congress, Meritxell Batet, has demanded this Thursday a commitment from all the members of the Chamber to "dignify" the institution and not use the speaker's rostrum to "hurt and offend" and has done so just after the deputy of Vox Patricia de las Heras will accuse the Government in the chamber of giving in to "communists, separatists, coup leaders, embezzlers" and to those who "defend those convicted of terrorism, pedophiles and rapists."

De las Heras has used this string of adjectives during his speech in a debate on the reform of the Railway Sector Law, a speech that has raised his parliamentary group to applaud it and that has led several of his colleagues, including the party leader, Santiago Abascal, to congratulate her.

Batet has let the deputy speak, but when she has finished she has taken the floor to remind her honorable members that they are in Congress representing the citizens and that they must "live up to" this task.

"Going up to the rostrum would have to be something sacred for all of us and, as long as there continue to be honorable members who go up solely with the desire to offend deputies and parliamentary groups and, therefore, to offend the citizens we represent, we will not be able to reach to a level of parliamentarianism worthy of what Spanish democracy is", warned the president.

That is why he has once again asked his colleagues not to use the rostrum to "hurt and offend" the other bench. "There are certain expressions and use of language that the only thing they are looking for is that and, to defend their positions, there are much more effective and dignified ways for Parliament and democracy than many of the interventions we hear here," he added.

Batet recalled that last Tuesday, at the Board of Spokesmen, he already called the heads of the parliamentary groups to reflect and has taken the opportunity to publicly repeat the request he made in private.

"I want a commitment from each and every one of you to collaborate to dignify and live up to what the citizens expect of us," he said, before warning that, with certain interventions, the deputies are "out" of article 16 of the Regulations of Congress, which obliges their lordships to respect order, courtesy and parliamentary discipline".

Batet's words have been supported with applause from the socialist bench and also from the ERC and have led to a request to speak to the Vox spokesman, Iván Espinosa de los Monteros, but the president has not given it to him. "He is not going to enter into a debate with the Presidency," she has settled.

‹ ›
Keywords:
Congreso De Los DiputadosVOXMeritxell Batet
Your comment has been forwarded to the administrator for approval.×
Warning! Will constitute a criminal offense, illegal, threatening, offensive, insulting and swearing, derogatory, defamatory, vulgar, pornographic, indecent, personality rights, damaging or similar nature in the nature of all kinds of financial content, legal, criminal and administrative responsibility for the content of the sender member / members are belong.
Related News