"Carla Toscano did not cry because she has more manliness and courage than the entire Congress Table and all the 'left-handed' deputies," she says. 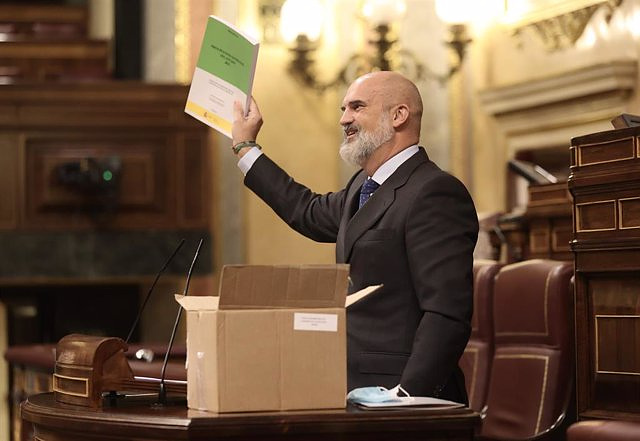 "Carla Toscano did not cry because she has more manliness and courage than the entire Congress Table and all the 'left-handed' deputies," she says

The Vox deputy Víctor Sánchez del Real has mocked this Thursday the accusations of "political violence" directed at his formation on account of the words that his partner Carla Toscano dedicated this Wednesday to the Minister of Equality, Irene Montero, has accused of lukewarm to the PP and has complained that only appeals addressed to his group have begun to be 'erased' from the Record of Sessions after the "little fight at the nuns' school", which is how he has referred to the fight that took place on Wednesday .

The parliamentarian for Badajoz has issued this complaint after the first vice president of Congress, the socialist Alfonso Rodríguez Gómez de Celis, announced that he is going to eliminate from the parliamentary act the term "filoetarra" that has been used from the ranks of Vox and also the word "fascist".

De Celis has taken up the plea expressed by the president of Congress, Meritxell Batet, this Wednesday after the row that followed Toscano's intervention. "I am going to continue insisting that if we want to be an example and be exemplary before society, we must also be so before ourselves because it is impossible to demand respect from others if we do not exercise it here", she said, justifying the withdrawal of those mentioned terms.

Minutes later, Sánchez del Real took advantage of his speech on the last day of the Budget Debate to justify criticism of the "scarce, disastrous, ridiculous and absent" curriculum not only of one person, but, as indicated, of the 22 that make up the Government of coalition. He said it just hours after Toscano remarked that Montero's "only merit" is "having studied Pablo Iglesias in depth", his partner and founder of Podemos.

Then, exaggerating the theatrical tone, he declaimed some of the terms that, as he has denounced, have been used throughout the budget debate in reference to Vox: "fascists, heirs of the regime, unworthy, xenophobic, promoters of violence against women...". He has also complained that he has branded the women of Vox as "macho." "This is the bomb, at least they have experience", he has slipped, before also mocking that they are accused of causing "political violence".

At another point in his speech, he singled out two of the United Podemos deputies with a seat on the Congress Table, Javier Sánchez Serna from Murcia and the Catalan Gerardo Pisarello to accuse them of having "yelled at a woman", in reference to Toscano, after his attack on Montero.

"In the presence of everyone and the Presidency they yelled at a woman who did not cry because a single Vox member has more manliness, courage and courage than the entire Table of Congress and all the left-handed deputies," he added.

And he has charged against the PP for not having reacted to those "screams" at Toscano. "Woe to the lukewarm, we know your works, neither cold nor hot, as in the appointment, you cause my mouth to vomit and every day more because we are talking about the communist apocalypse and with excel you do not deal with communism, never a legal report is going to beat the communists", he released.

In this context, he has warned the 'popular' that "the next ones the communists are going for" are "the lukewarm" and also the socialists or "warm betas" who, according to their forecasts, will be the next goal of communism.

Also the general secretary of the Vox group, Inés Cañizares, has charged against those who "call those who do not agree with their sectarianism fascists." "They claim a license to insult and despise and when they drink their own medicine they riot like wild beasts, but this will continue to be the case, we will continue to use our freedom of expression and stop them with arguments and dialectics," he said. .

Also the deputy Onofre Miralles has come out in defense of the Toscano deputy and criticizing the PP: "The left-handed is fought face to face; this is not for the lukewarm," he maintains.

‹ ›
Keywords:
PPIrene MonteroVOX
Your comment has been forwarded to the administrator for approval.×
Warning! Will constitute a criminal offense, illegal, threatening, offensive, insulting and swearing, derogatory, defamatory, vulgar, pornographic, indecent, personality rights, damaging or similar nature in the nature of all kinds of financial content, legal, criminal and administrative responsibility for the content of the sender member / members are belong.
Related News