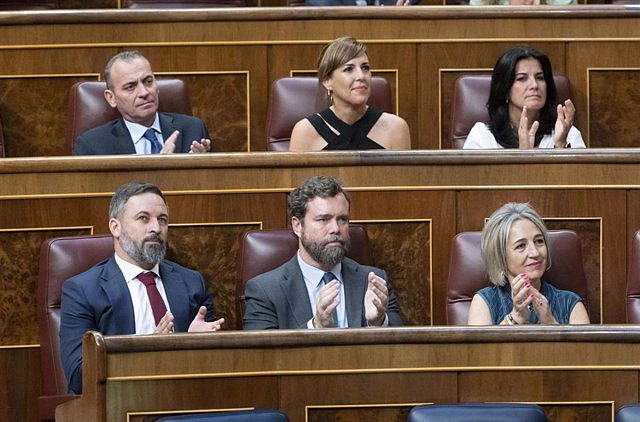 Vox has registered an initiative in Congress in which they demand the repeal of the energy saving plan approved by the Government and in which they propose their 'recipes' to combat this crisis, which go through the updating of the nuclear park, the paralysis of " dismantling" of the thermal plants and the urgent convocation of the National Security Council.

Those of Santiago Abascal have proposed these measures through a non-law proposal, in which they show their outright rejection of Pedro Sánchez's energy saving plan, which, among other things, limits the degrees of air conditioning and heating and forces certain lights to be turned off outside after 10:00 p.m.

According to the text of the initiative, to which Europa Press has had access, Vox insists on requesting the promotion of investment and updating of the nuclear generation park and that "the dismantling of thermal plants" be paralyzed as measures to combat this energy crisis.

Likewise, it requires Sánchez to convene the National Security Council "urgently" to "establish the appropriate measures, within its powers, with which to face the current energy crisis with guarantees for Spain."

Another of the points that Vox proposes in its parliamentary initiative is to urgently launch an Energy Contingency Plan, which would be executed by all the competent public powers "ensuring a sufficient energy supply and at affordable prices."

Of course, this would be a transitory measure while "a National Plan for Energy Sovereignty is designed and launched that includes the reduction and elimination of taxes and the reversal of any process of dismantling the productive capacity of thermal power plants of coal or nuclear power.

In addition, they want to repeal "all climate laws that have mortgaged energy production and ruin the countryside, industry and homes." Specifically, they ask that the Climate Change Law and the regulations that "prevent the exploration, investigation and exploitation of hydrocarbons" be canceled.

And it is that Vox denounces in its initiative that "more than 52% of the current structure of electricity generation and ends in Spain depends on the supply of energy or mineral resources acquired from other countries."

This supposes, according to his calculations, an expense of more than 20,000 million euros that "generates competitive and structural losses". "Losses caused, to a large extent, by the arbitrary measures in energy matters applied by the Government," they say.

"The latest measures carried out by the Executive suppose a new energy confinement that, far from solving any of the problems that Spain suffers, suppose a new restriction of the rights and freedoms of the Spanish", point out the deputies of Vox signatories of the non-law proposition.

‹ ›
Keywords:
Eficiencia EnergéticaCongreso De Los DiputadosVOX
Your comment has been forwarded to the administrator for approval.×
Warning! Will constitute a criminal offense, illegal, threatening, offensive, insulting and swearing, derogatory, defamatory, vulgar, pornographic, indecent, personality rights, damaging or similar nature in the nature of all kinds of financial content, legal, criminal and administrative responsibility for the content of the sender member / members are belong.
Related News