Vox has presented this Wednesday an appeal of unconstitutionality against the decree law of the Generalitat of Catalonia on the use of languages ​​in schools and that, in his opinion, "tries to abandon once again the use of Castilian. 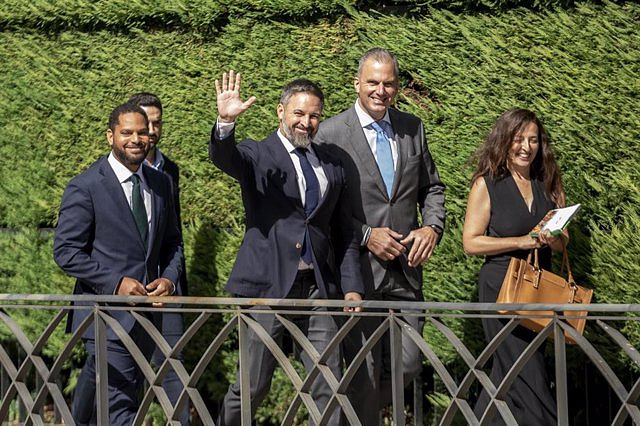 Vox has presented this Wednesday an appeal of unconstitutionality against the decree law of the Generalitat of Catalonia on the use of languages ​​in schools and that, in his opinion, "tries to abandon once again the use of Castilian."

The president of Vox, Santiago Abascal, has been in charge of presenting the appeal before the Constitutional Court accompanied by its leader in Catalonia, Ignacio Garriga; the general secretary of Vox, Javier Ortega Smith; and its legal representative, Marta Castro.

The training aims for the Constitutional Court to rule against the new Catalan law in schools agreed between the PSC, ERC, Junts and the 'comunes', which establishes the use of languages ​​based on educational needs and diversity cultural and linguistic aspects of the student body, avoiding the percentage of 25% established by the Superior Court of Justice of Catalonia.

"It is a very clear sign that Vox has established itself as the true defender of constitutional rights and the rights of Spanish citizens," Abascal proclaimed after appealing the decree law, which PP and Ciudadanos also took to the Constitutional Court jointly .

In Vox's opinion, the measure of the Generalitat is only "a ploy" to give the schools a "legal shield" with which to be able to breach the 25% ruling. "Once again, separatism shows rebellion and legal twists and turns to continue violating the rights and freedoms of the Catalans," Garriga denounced.

Abascal has erected Vox as "the true defender of the constitutional rights of citizens" (this is the fortieth appeal of unconstitutionality that he presents so far in the legislature), in addition to the "first national party" in Catalonia.

In his opinion, the problem is that the separatist parties, at the head of the Generalitat, "invade and steal" powers from the State "continually", "trample" on the rights of citizens and "fail to comply" with sentences. And all this, he has denounced, without finding "anyone in front".

At this point, Abascal has directly pointed to the PP and PSOE for the "pusillanimous" article 155 applied in Catalonia and having "agreeed with separatism" for thirty years. "The Government of the nation looks the other way. If Vox did not exist, who would be here today?" Garriga deepened.

Specifically, Vox's appeal questions whether the Generalitat resorted to the figure of the royal decree when, in his opinion, "there is no extraordinary and urgent need" that makes the use of this exceptional mechanism necessary.

But in addition, it maintains that the Catalan law affects the Constitution in relation to the right of Spaniards to know Spanish and the right to use it. "Co-officiality must be subject to a pattern of balance or equality between languages ​​without giving prevalence or preponderance to one over another," says Vox.

In addition, the training denounces that this law "violates the delimitation of powers" that make the Constitution and the statutes of autonomy and infringes article 24 of the Magna Carta that establishes the right to the execution of sentences and judicial resolutions.

‹ ›
Keywords:
Tribunal ConstitucionalVOX
Your comment has been forwarded to the administrator for approval.×
Warning! Will constitute a criminal offense, illegal, threatening, offensive, insulting and swearing, derogatory, defamatory, vulgar, pornographic, indecent, personality rights, damaging or similar nature in the nature of all kinds of financial content, legal, criminal and administrative responsibility for the content of the sender member / members are belong.
Related News