Violence against women in Latin America: the challenge of modernizing the region to save lives

UN Women for Latin America and the Caribbean denounces the use of rape as a "weapon of war". 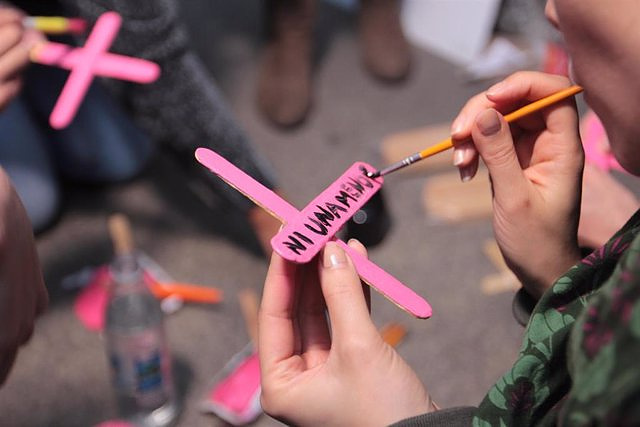 Discrimination and violence against women in Latin America continue to be the order of the day. The region is one of the most violent for women, which has led human rights activists and defenders to demand forceful measures from governments to educate and demand a full life free of violence.

With countries registering an average of eleven femicides per day, the situation is described as "unacceptable" by agencies and civil society organizations, who consider it necessary for the States and the Justice to advocate for modernizing and updating their legislation to guarantee the protection of women.

The director of UN Women for Latin America, María-Noel Vaeza, has stressed in an interview granted to Europa Press that the culture of violence "does not end with denunciation alone" and has stressed that the fight for human rights of women "goes through trying to change the behavior that reproduces sexist violence".

For her, it is also necessary to transform the attitudes and behaviors of those who exercise violence" for the sake of a "cultural transformation through an educational effort". "We cannot continue living in societies that reproduce violence against women", has manifested while applauding the legislative advances that classify femicide as a crime.

When it comes to fighting sexist violence from the institutions, it is important to achieve a "joint effort by governments and civil society", a job that, according to Vaeza, "bears fruit". "This is demonstrated by some laws that have been approved in Europe and Latin America in favor of gender equality and against violence against women. And that has been possible, precisely, thanks to the demands of civil society and to the work of the institutions that articulate and give shape to these aspirations", he asserted.

In Latin America, each country faces its own challenge in terms of defending women's rights. "It is clear that we must continue working with the whole of society so that the progress made is consolidated and there are no setbacks," said the Uruguayan, who has also worked as director of UN Women Programs.

In this sense, Vaeza has stressed the importance of a "vigilant and active" civil society and has taken the opportunity to draw the attention of governments, especially because of the coronavirus pandemic. "This pandemic has meant a setback of between 15 and 18 years in relation to women's rights," she lamented before referring to the labor aspect.

"This has only aggravated the pandemic of violence that already existed against women," she said while calling for parity despite the fact that Latin America is the region with the largest number of women parliamentarians. "We are still far from occupying half of the seats in congresses, in company boards, and we haven't even managed to occupy half of the opinion sections in newspapers," she insisted.

Vaeza has also stressed that in order to deal with violence against women it is necessary to "denounce, educate, demand that effective laws be approved" and also "ensure the right of women to work and to train".

Given the high level of workplace harassment, he has emphasized that state agents must play an important role and "guarantee the full application, control and enforcement of anti-harassment laws."

"Governments have a role in promoting social change and legislation must be complemented by comprehensive policies and practical measures that address the root causes of violence and harassment by changing social norms, including within institutions and in the world of work," he specified.

At this point, he pointed out, the actors in the world of work, such as companies and unions, "must help make the laws relevant and facilitate their application in the workplace".

Already in 2021, the International Labor Organization and UN Women asked the countries of Latin America and the Caribbean to ratify the 'Convention 190 on Violence and Harassment' after its entry into force.

However, after a year there are few countries that have ratified it: Argentina, Ecuador, Peru and Uruguay. Chile, for its part, has promised to turn it into law soon. Although there are few countries, as Vaeza has denounced, "Latin America continues to be the region in which the most countries have ratified the agreement", which recognizes the right of all people to a world of work free of violence and harassment.

"The agreement, by its very nature, needs to be implemented by the State, the private sector and the unions. Achieving consensus among these three actors is a process that takes time," he stated, listing some of the problems with which has met the ratification of the document.

The '190 Convention' commits the States to develop and effectively apply laws that guarantee its purpose: to end violence and discrimination in all workplaces.

On the situation of women globally and in a context of war, she clarified that before the Ukrainian conflict "we had Afghanistan", in addition to many areas in Latin America where violence impacts women and girls.

"In many cases, women are left alone in charge of the family, exposed to the threat of hunger, exploitation and human trafficking," she maintained before warning that "rape is once again used as a weapon of war ".

Thus, when women have to move, "many times as refugees or migrants, they can be victims of sexual violence, discrimination and prejudice," she pointed out.

However, he has warned that with the war in Ukraine "all resources, efforts and media attention are focused on the war", which leads to "we forget about women". "The impacts of this war at the international level, in terms of the multiple crises that are being experienced (...) are very worrying for the entire planet and especially for developing countries," she said.

In some Latin American countries, care, carried out mostly by women, is one of the main causes of inequality and constitutes up to 15 percent of the GDP of some States.

"The care work carried out by women, made invisible and not valued, is, in many cases, the main economic activity of a country", pointed out Vaeza, who recalled that women "are caregivers of their children, of the elderly and the sick." "We are caring all our lives," she added.

"This is accompanied by an effort to promote co-responsibility, which is a concept that goes beyond the private sphere. It is not just a question of alleviating the care burden of women within families, but of societies taking care of realize that care is a social responsibility and act accordingly", he explained.

Still with many pending debts with women, Latin America faces the challenge of modernizing the region to transform society and, ultimately, end violence.

‹ ›
Keywords:
Latinoamérica
Your comment has been forwarded to the administrator for approval.×
Warning! Will constitute a criminal offense, illegal, threatening, offensive, insulting and swearing, derogatory, defamatory, vulgar, pornographic, indecent, personality rights, damaging or similar nature in the nature of all kinds of financial content, legal, criminal and administrative responsibility for the content of the sender member / members are belong.
Related News