Vinicius: "I want to win five or six Champions"

"We will do everything possible to win the first trophy of the season". 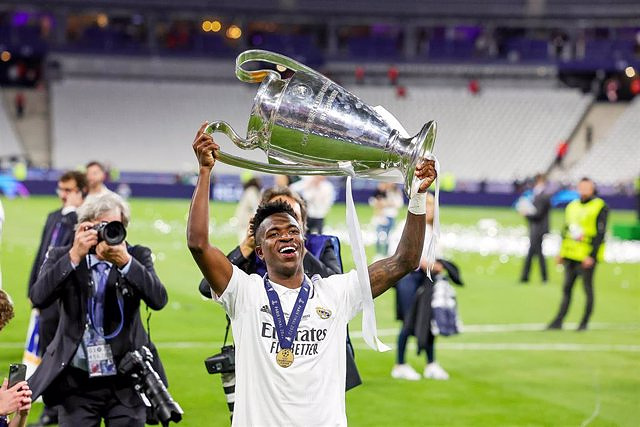 The Brazilian from Real Madrid, Vinicius Junior, showed himself wanting to lift the European Super Cup, next Wednesday against Eintracht Frankfurt, and continue expanding his record to try to be "as influential" as the great players in the club's history, also putting his focus on the Champions League.

"It is very important to try to win as many games as possible, especially if you want to win competitions as important as the European Super Cup. We will do everything possible to win the first trophy of the season," he said in an interview with Uefa this Saturday. com, collected by Europa Press.

The Brazilian was thus referring to the fight for the first title in the Super Cup against the Germans, after last season in which they won the Spanish League and the Champions League. "That's in the DNA of this club and this shirt, which always shows up in big games, players who know how to approach games in this competition, so I think there's been a little bit of everything," he says.

"Some of the games were rollercoasters of emotions and everything seemed to go our way. My favorite moment is the game against City here at the Bernabeu. Within two minutes, Rodrygo came in and scored two goals that took us to the final. I think that the most important moment of the competition was the game against City," he adds.

On the other hand, although he is aware of how difficult it is to reach a final, Vinicius was ambitious to win more Champions. "It was a very important moment for us: for me, for the whole team. After such a good season, we had to end it with a victory in the final. I always say that I have about 15 years left in my career and I don't know when my next final, so I had to enjoy it to the fullest," he remembers of Paris.

In addition, the Brazilian striker recognizes the importance of the work of coach Carlo Ancelotti. "I think he was able to get the best out of us, not only me, but the whole team. He is very kind and treats everyone like his children. Of course, he has a preparation job off the pitch, but when came here, it was the tranquility and confidence that he gave us", he concludes.

‹ ›
Keywords:
Real MadridBrasilChampions League
Your comment has been forwarded to the administrator for approval.×
Warning! Will constitute a criminal offense, illegal, threatening, offensive, insulting and swearing, derogatory, defamatory, vulgar, pornographic, indecent, personality rights, damaging or similar nature in the nature of all kinds of financial content, legal, criminal and administrative responsibility for the content of the sender member / members are belong.
Related News