Verstappen closes in on home title on bad day for Sainz

Alonso finishes sixth and the Madrid native is weighed down to eighth place by a penalty. 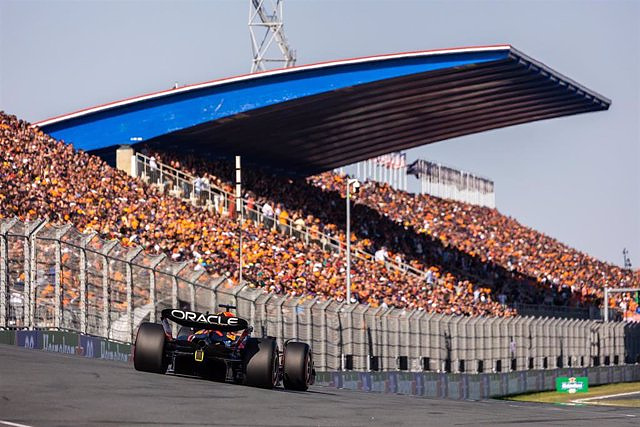 The Dutch driver Max Verstappen (Red Bull) won victory this Sunday in the Dutch Grand Prix race, the fifteenth round of the Formula 1 World Championship, and taken an almost definitive step to revalidate the title, while the Spanish Fernando Alonso (Alpine) finished sixth and Carlos Sainz (Ferrari), hampered by a bad pitstop and a penalty, could only finish eighth.

With his tenth win of the season, this time ahead of Britain's George Russell (Mercedes) and Charles Leclerc, the reigning world champion strengthens his lead in the drivers' standings, in which he is 109 points ahead of the second-placed Monegasque . His second World Cup, closer.

For his part, Alonso, who started thirteenth after staying in Q2 on Saturday, climbed back to finish sixth, benefiting from the final penalty of five seconds to a desperate Sainz; A bad first stop in the pits upset the plans of the Madrid native, who received a penalty in the last laps for an 'unsafe release' against Alonso in the 'pitlane' that made him drop three places.

The turning off of traffic lights unleashed the fight on the demanding Zandvoort track, where overtaking is expensive. Verstappen, Saturday's 'poleman', defended his privileged position without opposition while Alonso got stuck behind the AlphaTauri and Sainz came out unscathed from a touch with Hamilton when he tried to snatch third place from him.

The effort of the Madrilenian, however, was spoiled by the work of the Ferrari men in garages just 15 laps after starting; at his stop, the mechanics left one of the rear wheels behind and lost more than 12 seconds. "My God," Sainz lamented after the incident.

Meanwhile, Leclerc threw an 'undercut' against the leader, who responded by also stopping to leave the pits with a five-second lead. The Mercedes were thus commanding the race, with Lewis Hamilton ahead of George Russell.

Nine laps later, on lap 28, Verstappen passed the youngest driver of the 'Silver Arrows', and the seven-time champion changed tires to defend himself in the final stretch of 'Mad Max'. At the pace of fast laps, the last two world champions did not hide their cards and threw everything.

The tire wear began to weigh down the Dutchman, who opted to lengthen the 'stint' to ride soft while Hamilton cut him down on each lap. Only the chaos and the yellow flag caused by the Japanese Yuki Tsunoda (AlphaTauri), first by assuring that his wheels were not properly mounted and then by unfastening his seat belt when he thought he was going to leave, alleviated the suffering of the reigning champion.

With an almost free stop, the victory was put on a plate. The hard rubber made him fly before his countrymen, who dyed the stands of Zandvoort orange, and another safety car for the arrest of the car of the Finn Valtteri Bottas (Alfa Romeo) allowed him to return to the garages to dress the soft compound again.

Facing the medium tires of Hamilton's car, which had taken a momentary lead, the Dutchman found himself unopposed on the restart of the race, flying all the way to the checkered flag. Russell, with soft, also beat his compatriot, visibly pissed off - "I don't believe it", he said on the radio - and who was sold against Leclerc's better pace.

The Monegasque climbed to podium positions with six laps to go and nothing changed, except for Sainz's final fiasco; The Spaniard, with a five-second penalty for hindering Alonso in the pitlane, dropped three positions and finally finished fifth.

‹ ›
Keywords:
Fernando AlonsoFormula 1Países BajosFerrari
Your comment has been forwarded to the administrator for approval.×
Warning! Will constitute a criminal offense, illegal, threatening, offensive, insulting and swearing, derogatory, defamatory, vulgar, pornographic, indecent, personality rights, damaging or similar nature in the nature of all kinds of financial content, legal, criminal and administrative responsibility for the content of the sender member / members are belong.
Related News