Hugo Duro signs the victory (2-1) against Atalanta with a nice double. 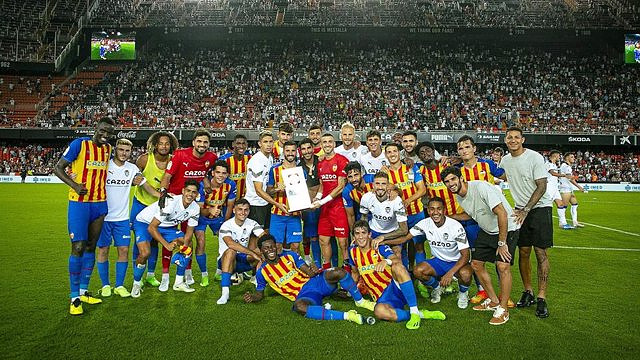 Valencia CF conquered this Saturday the 50th edition of the Taronja Trophy, its official presentation at Mestalla, by beating Atalanta (2-1), thanks to a great brace from Hugo Duro.

Gennaro Gattuso's team left a good image before their public, a 'che' crowd that will still have to receive many more of these to trust in a positive season after a lot of swell.

Even at the 'taronja' party, concern for the team was not lacking, due to information about the possible departure of Gonçalo Guedes, one of the team's highest quality players, although the Portuguese is usually in the rumors every summer.

The Portuguese did not even dress short for the appointment in Mestalla. Samuel Lino, the last to arrive in Valencia on loan from Atlético de Madrid, was the protagonist at the start, constantly looking for the opportunity to see the door. Gattuso's team jumped high in pressure and intensity and created many chances.

The domain did not finish giving the locals the goal, with even a ball to the crossbar, while Atalanta started a small back and forth. Shortly before the break, Duro made it 1-0 with a nice backheel to the center of Gayá. Atalanta needed much less, since after the break, Ederson made it 1-1.

It was the first shot on goal for the Italians, a good goal too, but Valencia did not lower their guard and continued to lead. The presence in the rival area did drop, and Gattuso's men did not have too much arrival in the second half. Already in the final stretch, Soler had it and then Duro made it 2-1 in 81'.

The striker from Madrid asked for a place in the new Valencia with an impeccable header winning the game from behind the rival. This is how the 'che' team kept their trophy, taking advantage of the first opportunity to give joy to their fans, who hope to forget the disappointments with the board and the lack of investment, under Gattuso's orders.

‹ ›
Keywords:
Valencia CF
Your comment has been forwarded to the administrator for approval.×
Warning! Will constitute a criminal offense, illegal, threatening, offensive, insulting and swearing, derogatory, defamatory, vulgar, pornographic, indecent, personality rights, damaging or similar nature in the nature of all kinds of financial content, legal, criminal and administrative responsibility for the content of the sender member / members are belong.
Related News