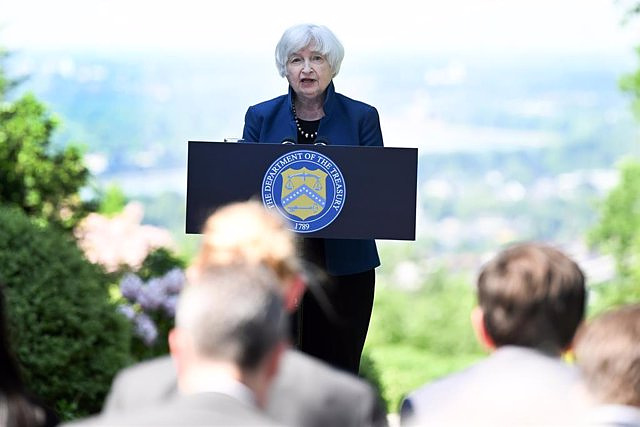 The United States Treasury has issued this Friday some approximate compliance guidelines to propose a cap on the price of Russian oil as of December 5.

The guidance, issued by the Treasury's Office of Foreign Assets Control, gives private companies the task of enforcing the cap by seeking certification that Russian oil is sold at or below the price set by the United States along with other G7 members.

This program is aimed at insurance companies and financial companies that facilitate international oil trade. The program "will be based on a process of record keeping and certification that allows each party in the supply chain of Russian oil transported by sea to demonstrate or confirm that the oil has been purchased at or below the maximum price," he said. reiterated the government agency.

The limit will be in effect on December 5 for crude oil and February 5 for petroleum products, in line with the implementation of the European Union's ban on services associated with oil transported by sea and refined products. .

"The price cap seeks to create incentives that reduce Russia's income while its oil continues to flow," explains the Treasury statement, published on its website.

"We are moving forward with this extraordinary proposal because it is essential that the global community take action to deny the Kremlin the revenue it is using to prop up its economy and wage its unjustifiable war in Ukraine," he said.

Likewise, the department of the US Government has maintained that "the conclusion is that everyone wins except the Kremlin."

‹ ›
Keywords:
Estados UnidosRusiaPetróleoUcrania
Your comment has been forwarded to the administrator for approval.×
Warning! Will constitute a criminal offense, illegal, threatening, offensive, insulting and swearing, derogatory, defamatory, vulgar, pornographic, indecent, personality rights, damaging or similar nature in the nature of all kinds of financial content, legal, criminal and administrative responsibility for the content of the sender member / members are belong.
Related News