Uruguay turns to history to host the 2030 World Cup alongside Argentina, Chile and Paraguay 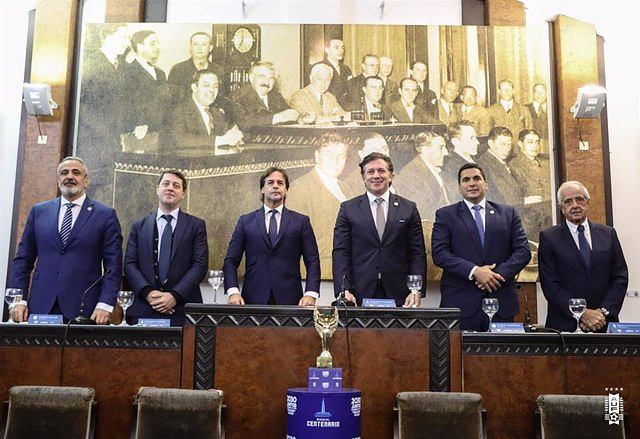 The Uruguayan Football Association officially presented the candidacy to host the 2030 World Cup together with Argentina, Chile and Paraguay, in an act that took place this Tuesday at the Centenario stadium, where the "celeste" have resorted to centuries-old history to try to convince FIFA.

The South Americans, who are competing against Spain and Portugal to host the World Cup in 8 years, opted to highlight history in the stadium that precisely hosted the first World Cup, in which Uruguay won the title after beating Argentina 4-2 .

Present at Tuesday's ceremony were Alejandro Domínguez, from Conmebol, Uruguayan President Luis Lacalle, as well as other leaders from Paraguay and Chile. "It is the dream of a continent. Of a Uruguayan people, shared by three other peoples. South America understands that soccer has to recognize and not dispute," said Domínguez.

"There are going to be more World Cups, but 100 years are going to be fulfilled for the only time and you have to go back home. That is more than enough reason for FIFA to accept that it be a single candidacy. With the passing of the years, there will be other possibilities for other continents," he added in his parliament.

For his part, the president of the Uruguayan Football Association, Ignacio Alonso, stated that it is "fair" that the 2030 World Cup be held "where it all began" in 1930, in relation to the first World Cup title won by his country.

‹ ›
Keywords:
ChileParaguayFifaArgentina
Your comment has been forwarded to the administrator for approval.×
Warning! Will constitute a criminal offense, illegal, threatening, offensive, insulting and swearing, derogatory, defamatory, vulgar, pornographic, indecent, personality rights, damaging or similar nature in the nature of all kinds of financial content, legal, criminal and administrative responsibility for the content of the sender member / members are belong.
Related News