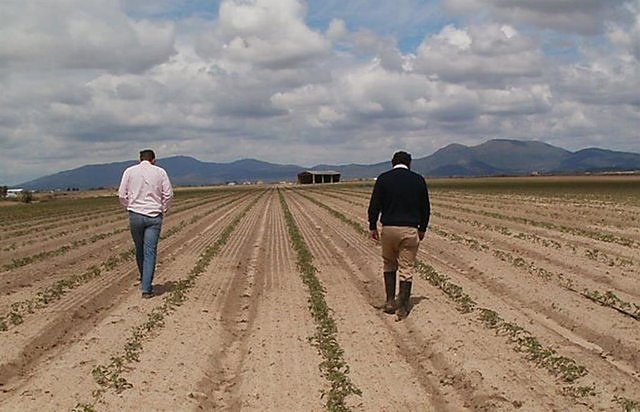 The agrarian organization UPA has demanded a comprehensive policy that protects the countryside against climatic adversities, for which it has asked to take into account "agrarian exceptionality" in energy policies to reduce the producers' bill. The drought is added to the heat waves to form a "terrible summer" for the Spanish countryside, they have summarized.

Modernization of irrigation, reductions in desalinated water and new infrastructures are some of the solutions proposed by farmers.

After participating in the working group of the Drought Roundtable, the Union of Small Farmers and Ranchers has called for the implementation of a comprehensive policy to protect agriculture and livestock against climatic adversities, which, as the data shows, and experience, are increasingly serious.

They have shown that the low rainfall in winter, spring and summer, added to the heat waves that have occurred from May to August, have placed most of the national territory in a situation of very serious drought, with special incidence in the south and center of the country.

The drought and heat have affected crops such as cereals, olive groves, vineyards, fruit and vegetables and all the extensive or semi-extensive livestock sectors, whose costs have skyrocketed due to the absence of pasture. A situation, that of the pastures, which has been aggravated by another of the dramas of this summer: the forest fires, about which UPA has asked that the cattle not be prevented from grazing on plots affected by the fire.

UPA has demanded that "courageous policies be implemented, with short, medium and long-term measures", with a fundamental objective: that Spanish farmers and ranchers can continue producing food to feed the population.

To do this, it is "essential" to invest in modernizing existing water infrastructure and creating new ones that make us more resistant to extreme weather events such as torrential rains that could predictably come in the next due to the large amount of heat accumulated in the Mediterranean.

For these investments, UPA believes that the Next Generation funds of the European Union must be counted on, the agrarian formation has indicated in a press release.

Another of the UPA proposals focuses on lowering the price of desalinated water, a resource that is becoming more important every day, but whose costs must be "affordable" for farmers. In order to guarantee access to water, it is necessary to reduce the cost of access to the energy necessary to pump and make this resource reach the crops, they say.

For this, what UPA calls "agricultural exceptionality" must be taken into account: "We are a special sector, with energy consumption with peaks and valleys, and pricing must be adapted to this reality. We demand that double pricing be put in place now" .

UPA has proposed articulating budgetary and fiscal support measures, in addition to those that have already been implemented, such as the reduction of income tax modules, with special attention to family farms, "those that need the most support and they deserve", they assured.

The organization believes that it is necessary to study the reduction of VAT on the inputs of the products needed by agriculture and livestock, especially energy sources --diesel and electricity, among others-- and fertilizers. Support for contracting agricultural insurance must also be strengthened, especially by the autonomous communities.

UPA has defended what in its opinion is a reality: Spanish irrigation systems are sustainable and exemplary in the efficient use of water. "We must continue researching and investing in state-of-the-art technology applied to irrigation. The food supply for the entire population is at stake."

Finally, the organization has demanded effective measures to fight and adapt to climate change that take into account the vulnerability of the sector.

The organization has requested a meeting of a political nature where concrete measures are analyzed to accompany the shock plan approved last March.

‹ ›
Keywords:
Sequía
Your comment has been forwarded to the administrator for approval.×
Warning! Will constitute a criminal offense, illegal, threatening, offensive, insulting and swearing, derogatory, defamatory, vulgar, pornographic, indecent, personality rights, damaging or similar nature in the nature of all kinds of financial content, legal, criminal and administrative responsibility for the content of the sender member / members are belong.
Related News